Hyness, titled Officiant of Doom, is the principal villain in Kirby Star Allies, serving as the penultimate boss in Story Mode. He is the mad priest who worships Void Termina, and leads his cult from the fortress world Jambandra, where his dark god was sealed in ancient times. Known as the Officiant of Doom, Hyness is a venerable wizard who conceals himself in a white robe with long trailing sleeves and a veil that covers his face, such that only his beady yellow eyes can be seen. While his shape and motions would suggest he has limbs, these are never seen from under the robe, which makes it entirely possible that he does not have any. Hyness leads a host of subjects, the most prominent of which are The Three Mage-Sisters: Francisca, Flamberge, and Zan Partizanne. When his hood is removed, he is revealed to have a blue face, blue and yellow striped ears, and eyes that move independently of each other.

It is implied in the separate The Ultimate Choice - Soul Melter EX VS Special Pages of Francisca, Flamberge, and Zan Partizanne that Hyness saved their lives from doom. Since then, they look up to him with admiration and seek his guidance, a loyalty that is ultimately exploited by the crazed officiant.

Hyness is voiced by Shigeru Chiba, a veteran actor and voice actor.

According to an interview with Shinya Kumazaki in the Nintendo Dream magazine issue from June 2018, Hyness always had a wicked heart, but he still saved the Three Mage-Sisters after they nearly died and took them in. The mages hold him in great respect as a result, even though he often treats them poorly. Despite that, he seemingly often apologized for forgetting Zan Partizanne's name, and even tried to warn her whenever his heart started to act crazy again, as implied in his phase two boss fight pause description in The Ultimate Choice, and in the phase two boss fight pause description of Corrupt Hyness. Moreover, the 14th post of the Kirby Star Allies Channel states that Hyness had forsaken his own heart and fell into darkness, becoming trapped in a spiral of loneliness and despair. Thus, he had changed for the worse.

Hyness is depicted as completely insane, with incredibly deranged mood swings. He fits the image of a demented cult leader or priest. When Kirby and his friends encounter him, he first talks calmly and somewhat eerily but then starts to become furious. He begins shaking his head and flailing his arms rapidly while talking very quickly. In his second phase, he starts making strange angry grunting and snorting noises and doing bizarre dances. His battle themes also seem to elaborate on his eeriness and insanity. 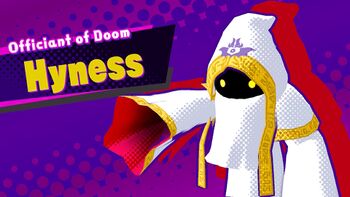 Hyness calls upon the power of the Jamba Heart in the intro cutscene.

Hyness debuted in Kirby Star Allies, where he is first seen in the intro movie, beginning a ritual to activate the Jamba Heart by removing the heart spears that keep it sealed. The spears are successfully removed, but this causes the heart to shatter, scattering its pieces all over the galaxy. Though this was not known to Kirby at first, the shattering of the heart was in fact a mistake, as Hyness sends out the Mage-Sisters to retrieve the pieces and bring them back to Jambandra for a do-over. When Kirby and his allies eventually reach The Divine Terminus, they find Hyness watching over the heart as the last pieces return to it. Zan Partizanne tries to stop the Star Allies from interfering, but is defeated, and collapses before the altar. Seeing this, Hyness turns to face the allies himself, coldly swiping Zan out of the way for her failure. After delivering a very long and crazed rant at Kirby, Hyness proceeds to fight the Star Allies. Shortly into the battle, however, his hood gets knocked off, revealing his true face. From there, he uses the unconscious bodies of the three Mage-Sisters as weapons against Kirby, even forming his own version of a Friend Circle during the battle.

Kirby manages to defeat Hyness, forcing him to resort to extreme measures to revive the still-incomplete Jamba Heart. To fill in for the missing pieces, he tosses the three Mage-Sisters into the heart, then dives headlong into it himself as a sacrifice. This done, Void Termina awakens from his slumber, and Kirby has to defeat him using the Star Allies Sparkler. During the fight with Void Termina, Kirby and his allies climb inside the great beast. There they find Hyness and the Mage-Sisters wrapped in flesh cocoons. After dealing heavy damage to Void Termina's core, Kirby, his allies, and all four of the sacrificed devotees are expelled from the dark lord's body. After that point, Hyness and the Three Mage-Sisters are not seen again for the remainder of the story.

During his crazed rant, Hyness says a great deal which requires close inspection to understand (as the dialogue text scrolls too quickly to read in a timely manner). The full text for that portion is as follows:

We are the masters of a power driven to the far reaches of the universe, and we have but one desire! Can one such as you possibly fathom how dearly we have clung to this dream across the aeons? How could you! You couldn't! Never ever ever! We who once faced those who were in such fear of our power that they sealed us away and banished us to the edge of the galaxy! US! As if THAT loveliness wasn't enough, they tried to erase our very existence from history! RUDE! Only through our magic were we able to overcome their science and achieve great prosperity! We alone were responsible for stopping that repulsive nightmare of a galactic crisis, yet this is how you repay us! This won't stand! It won't be forgiven! It won't be forgotten! Never ever EVER! Those who called us mad, are you listening? You left us at the edge of the galaxy to be forgotten, then went along your merry way, probably living somewhere pretty and peaceful! But know this! Your future is a farce! You have none! We, masters of a matter most dark, vow to be restored, as foretold in the book of legend, which everyone thought was just a fairy tale! It WASN'T! We have already obtained the vessel that contains our Dark Lord, and he will soon awaken and shower us in compassion! Look! The vessel of our Dark Lord is filling up even as we speak! Now the time for his greatness to enter our world has come! Welcome to a new history! A new age! The age of awesome! HAPPY BIRTHDAY, DARK LORD! HAPPY BIRTHDAY!

The contents of this rant have many implications lain therein, but since Hyness is a questionable character, and this information was presented so quickly, the words should probably not be taken at face value.

Hyness's fight takes place at The Divine Terminus in Far-Flung Starlight Heroes, just after Zan Partizanne is defeated. It consists of two distinct sections. In the first, Hyness battles Kirby alone, using his magic to form orbs and elemental discharges. Once Hyness is nearly depleted in health, his hood gets knocked off, and he brings the Three Mage-Sisters in, sapping their life-force to replenish his own. From there, he fights while using their bodies as both weapons and shields. When Hyness is not using them to attack, the sisters orbit their master and will deflect Star Bullets that cannot penetrate objects, as well as other weaker projectiles. Attacking the Mage-Sisters will not damage Hyness.

The following lists all of Hyness's attacks. Attacks in italics are used during the second phase only. As Corrupt Hyness, Hyness may sometimes combine his first phase attacks.

There are many different attack orders that Hyness uses for his various fights. Click "Expand" on the right to see the lists.

Hyness attacks in a fixed order on loop as follows (phase 1):

After sustaining enough damage, Hyness will abruptly switch to this pattern:

The pattern differs slightly when fought on Guest Star ???? Star Allies Go! or Soul Melter of The Ultimate Choice:

At the start of phase 2 in Story Mode and the Sizzling Threat to Infernal Crisis difficulties of The Ultimate Choice, Hyness can attack in one of two fixed orders on loop as follows:

The patterns differ slightly when fought in Guest Star ???? or Soul Melter:

After losing half of his stamina, Hyness, after pulling out any Mage-Sisters still stuck in the ground upon getting furious, begins with this attack:

After that he will attack in one of two fixed orders on loop as follows:

The patterns differ slightly when fought on Guest Star ???? or Soul Melter:

In Heroes in Another Dimension, after opening every portal, Hyness transforms into Corrupt Hyness, titled Fell Officiant. He essentially looks the part of Hyness, but in a dark robe, and his face is black and red, rather than purple and yellow. Because the Three Mage-Sisters haven't found him yet prior to this battle, he summons three logs with the mage's costume as his weapons and shields when unhooded.

When Corrupt Hyness is defeated, Zan Partizanne finally arrives and calls his name, only to find him out cold. She then calls on Francisca and Flamberge, who are angered by the state he is in. Kirby then proceeds to fight The Three Mage-Sisters as a whole.

The ending of Hyness and the Mage-Sisters depends on how many Friend Hearts Kirby has collected:

In The Ultimate Choice the boss endurance mode, Hyness is fought starting from the fifth difficulty level:

Hyness appears in Super Kirby Clash as a resident of Castle Village, appearing after completion of The True Final Battle EX. He also appears as a sticker, which is based on his appearance in the card that shows after completing Heroes in Another Dimension with the Happy Ending in Kirby Star Allies. This sticker is unlocked after clearing the "Tougher: Taranza" Party Quest.

In addition to the dialogue theme, Hyness has different boss battle themes for his two phases. All these themes are composed by Jun Ishikawa.

The dialogue music of Hyness (as well as the map theme of Jambastion) has the same melody as the stage music of Friendly Field, but in a much slower tempo with a haunted bell tune.

The first battle theme of Hyness is titled [1] ("Puppet Offering"). It can be found as Track 109 in Star Allies Jukebox.

The first section of this theme has a slow tempo and a similar bell tune to the dialogue music of Hyness, but the later sections have very different melodies.

The second battle theme of Hyness is titled "",[1] which means "The Madness of Love" in Italian. It can be found as Track 110 in Star Allies Jukebox.

"La Follia d'amore" has a much faster tempo, featuring violin and glockenspiel.