Tornado is a Copy Ability which allows Kirby to spin rapidly until he turns into a small nigh-invulnerable vortex, capable of ripping through enemies and traveling large distances quickly. The primary disadvantage to this form is that it can be somewhat difficult to control. The ability is usually only available by swallowing a Twister, though other less common providers include Caller and the Mid-Boss Fleurina. In most games, the Tornado ability is accompanied by a hat similar to those of the Fire and Ice abilities. This hat, however, is topped with a small vortex, and a green crystal marking the center of the hat.

Tornado first appeared in Kirby's Adventure, making it among the oldest Copy Abilities in the Kirby series. Since then, it has made several other appearances, though often with large gaps between showings in the main series. Its most consistent string of appearances was between Kirby: Nightmare in Dream Land and Kirby: Squeak Squad, as it never missed an appearance in that game-span.

Using Tornado, Kirby can make rapid progress and clear out any enemies in his way...so long as he maintains control.

Tornado is one of Kirby's most powerful and potent Copy Abilities, giving him several seconds of sustained invulnerability while he moves rapidly, defeating or passing through nearly any enemy and obstacle along the way. In most of his appearances, however, Tornado Kirby is forced to move while using his attack, and he will rapidly bound off of surfaces, making controlling him tricky. Starting up and finishing the attack requires some time as well, making Tornado's attack tricky to use against bosses without getting hit during those periods of vulnerability. In most of Tornado's appearances, holding down the jump button will make Kirby rise slowly while using the attack, allowing him to take to the sky as needed.

While Tornado tends to consistently be one of Kirby's simplest abilities in terms of move-set, its specific properties and powers can change in-between appearances. In Kirby Air Ride, Tornado can be seen as little more than an upgrade to the already-existing Quick Spin technique. In Kirby's Return to Dream Land, Tornado Kirby has access to a couple other moves in the form of quick burst attacks and projectiles. In Kirby and the Forgotten Land, Tornado Kirby can catch enemies in his vortex and then toss them at other foes, similar to Needle. In Kirby's Dream Buffet, Tornado can grab strawberries at a distance on the course and draw them towards Kirby.

Kirby using Tornado to rush through an area in Kirby's Adventure.

The Tornado ability debuted in Kirby's Adventure, along with all of the other first Copy Abilities, and also appears in Kirby: Nightmare in Dream Land (where it first got its hat in the games). It allows Kirby to travel quickly through the air in a whirlwind, being effectively invulnerable while the attack is executing. Controlling Kirby's trajectory while this move is being used can be tricky, however.

Tornado is provided solely by Twister or a Mix in these games. Due to Twister's relative rarity, however, Tornado can be hard to come across. 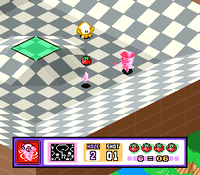 In Kirby's Dream Course, the Tornado Copy Ability can be acquired by colliding with Twister. Using this ability allows Kirby to move rapidly across the board and cover a lot of ground, though the tornado can be tricky to control. The distance this move can cover depends on the terrain, as trying to spin uphill will cause Kirby to slow down and stop spinning, while traveling downhill will speed him up. Deft movement on varied terrain can allow Tornado Kirby to cover a lot more ground than he otherwise would have been able to.

Tornado appears in Kirby Air Ride, provided by the obscure enemy Caller. When active, Kirby will perform a powerful spin attack after a boost or when performing a Quick Spin. Enemies caught in this attack will be sent flying and spinning. Like with other abilities in Kirby Air Ride, the ability only lasts for a short time.

Tornado returns in Kirby & The Amazing Mirror, and is provided by Twister as usual. It looks and functions identically to the way it did in Kirby: Nightmare in Dream Land.

In Kirby: Canvas Curse, Kirby can gain the Tornado ability by defeating Twister. Using this ability, Kirby can rapidly rise into the air without the aid of a Rainbow Line when the player taps him repeatedly using the Nintendo DS stylus. While spinning, Tornado Kirby can also defeat enemies.

Since Twister only appears in two stages in the main Story Mode, Tornado is one of the rarest abilities in this game.

Tornado returns in Kirby: Squeak Squad. Kirby can cause his vortex to take on an elemental attribute such as fire, ice, or lightning by touching the appropriate element. However, this can only be done once the Ability Scroll for Tornado is found. Also, when the elemental attribute is gained, the vortex nearly doubles in size. Tornado Kirby can hit more rapidly in this game than in previous ones, making the ability very handy for defeating bosses.

Tornado Kirby as he appears in Kirby's Return to Dream Land

Tornado is one of the abilities on offer in Kirby Battle Royale. Tornado allows for long-lasting attacks, but leaves Kirby vulnerable at the end of it. When using the Big Tornado, Kirby can draw items such as Apples closer to him and hit nearby opponents, even when they are airborne.

In addition, Tornado comes with three alternate costumes in this game. Those are the Twister Hat, the Pinwheel, and the Kracko Hat.

After a 10 year absence from mainline titles, Tornado Kirby returns in Kirby and the Forgotten Land. In this game, Kirby has more control over his vortex, traveling primarily on a horizontal plane. In addition to its usual provider, Twister, Tornado can now be obtained from Fleurina, a swan-like Mid-Boss. One of the Evolved Copy Ability forms for Tornado, Fleur Tornado, resembles Fleurina, and using this version of the ability gives Kirby a bigger and more powerful whirlwind that grows over time. The other evolved form, Storm Tornado, resembles storm clouds, and using this version of the ability gives Kirby an even more powerful whirlwind than the previous one, along with allowing him to strike nearby enemies with lightning.

Tornado Kirby's moveset has once again been simplified for this game, though one notable distinction is the addition of the Hyper Tornado finisher, which allows Kirby to end his spin early with a larger gust hitting all enemies around him. Tornado also gains the ability to cool down Fire Blocks, much like the Ice ability.

Tornado returns as an ability in Kirby's Dream Buffet, and has been redesigned to fit the Copy Food motif like the other abilities in this title. Here, Kirby takes on the appearance of a cup of frosting when he picks up the Tornado Frosting item from a Food Box. Using this ability, Kirby can create a vortex that throws other racers around and can draw strawberries towards himself. Pressing and holding the R button will increase the vortex's radius, but reduces Kirby's movement. This ability can be used in all of the game modes, but it travels fastest when used in the race mode. Kirby will not roll off edges while using this ability. When Tornado Kirby hits a rival racer while using this ability, that racer will be stunned for a moment, meaning they will be unable to recover if thrown off an edge.

In the anime series Kirby: Right Back at Ya!, Tornado makes a few appearances, and is notable for being one of the most powerful abilities in Kirby's arsenal. Using the Tornado Ability, Kirby can conjure massive gusts of wind and affect the weather on a large scale. In its most basic usage, Kirby can conjure a tornado from his hat which can be used to blow his opponents away or keep them caught aloft spinning through the air. Kirby also often uses this ability in conjunction with bodies of water to solve problems. In Mabel Turns the Tables, Tornado Kirby uses his power to part the ocean for Mabel in a scene that mirrors the parting of the Red Sea in the Book of Exodus. In Tornado Kirby's final episode, Trick or Trek, he uses the ability to conjure a storm to put out a massive forest fire and save everybody inside.