Metal General is a boss in Kirby's Return to Dream Land. It is the boss of Egg Engines and its defeat is required in order to complete the level.

When Kirby and his friends first enter Metal General's arena, the robot is stationary, but when they get close to it, it will activate and let out a burst of steam, signifying that the battle has begun. 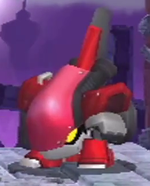 Metal General is a short, robotic character with a dark blue and light blue paint job and has yellow eyes. It has a shoulder pauldron above its short left arm, boot-like legs similar to Kirby's, and a right arm with a multi-purpose weapon launcher. Overall, it looks very similar to a shark.

When knocked to half health, Metal General does not change appearance. Instead, it simply starts sparking and stuttering.

Metal General EX looks the same, but with a pink and red paint job.

The following lists all of Metal General's attacks in the Main Game of Kirby's Return to Dream Land. Attacks in italics are used in the second phase of the fight only.
*Attack names are conjectural.

Defeating Metal General in the Main Game causes it to crumble and explode, finishing the level.

In Extra Mode and The True Arena, the General has many more weapons in its arsenal, and uses them more frequently to litter the stage with hazards. Additionally, many of its moves that it only used in the second phase in the Main Game are used in the first phase here. Once defeated in Extra Mode, it flies off and pilots HR-D3 to attack Kirby once again.