Ozomashii[Japanese title] is a spectral dragon-like monster that appears in the Kirby: Right Back at Ya! episode A Sunsational Puzzle. It is presented as responsible for a hole in the ozone layer above Dream Land which is letting in dangerous amounts of ultraviolet radiation. After discovering its existence, Kirby is sent to deal with the monster on his Warp Star, first attempting to fight it with the Jet Copy Ability, but later defeating it with the Bomb ability.

Ozomashii is a wispy ghost-like dragon-shaped being which seems to be made of ultraviolet light and resides within the ozone hole above Dream Land. It is ethereal in nature, and can re-congeal when damaged if given enough time. It attacks by shooting rays of deadly UV radiation from its mouth.

It is not clearly explained in A Sunsational Puzzle how Ozomashii formed or what exactly its nature is, as Professor Curio explains the main source of the ozone hole to be the CFC gases emitting from the air conditioner units sold to them by Night Mare Enterprises.

Role in A Sunsational Puzzle[edit] 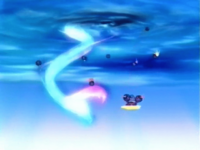 Bomb Kirby attacks Ozomashii by pelting it with several explosives at once.

Ozomashii appears from the ozone hole above Dream Land in the episode A Sunsational Puzzle. Kirby endeavors to battle this creature high in the sky on his Warp Star, but can initially do little but try to dodge its attacks. To help him, Tiff and Tuff toss Kirby the gas canister from their hot air balloon to give him the Jet Copy Ability. However, Kirby is not able to make much progress against Ozomashii with this ability, as he punches through it at one point but this hole is quickly healed. Eventually, Kirby is given the Bomb ability inadvertently by King Dedede who was trying to blast Kirby out of the sky using an explosive cannonball. Using this ability, Kirby is able to blast Ozomashii with several bombs at once which is enough to cause it to disintegrate, patching up the ozone hole in the process.