This article is about the spin-off title for the Game Boy Color, and should not be confused with Tilt-and-Roll Kirby.

Kirby Tilt 'n' Tumble is a spin-off Kirby game released for the Game Boy Color, being the only game in the series to be released for that specific system. It was first released in 2000 in Japan and then the following year, 2001, in North America. The game was never released in Europe.

In Kirby Tilt 'n' Tumble, King Dedede is once again responsible for stealing Dream Land's Sparkling Stars, and Kirby is tasked with setting out and recovering them. Instead of running, hovering, or inhaling, however, Kirby traverses his world by rolling around like a marble in a top-down environment, where the biggest obstacles are bottomless pits and any enemy or object which threatens to bounce Kirby into one. Uniquely, Kirby Tilt 'n' Tumble uses a tilt sensor built into the game cartridge allowing the player to move Kirby around through physical movement of the Game Boy Color console, rather than using any of the face buttons. Additionally, the player can flick the console to make Kirby bounce into the air, which also has an effect on enemies and objects in the game.

The game was developed by Nintendo R&D2, Nintendo's primary hardware-developing division, which was later merged into Nintendo SPD. It was originally planned to have a direct follow-up for the Nintendo GameCube - titled Kirby Tilt 'n' Tumble 2 - which would have been controlled from a Game Boy Advance via the link cable. Kirby Tilt 'n' Tumble 2 was ultimately canceled for unknown reasons, however. 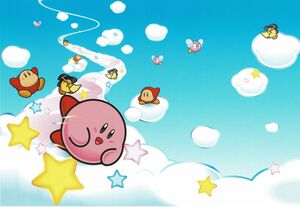 Artwork from the instruction manual

Kirby is sleeping on a cloud, when he is awoken by a Waddle Dee and King Dedede walking past him carrying strange objects. Kirby is curious as to their intentions, so he hops on a Warp Star, only to find that Dream Land has been robbed of its stars. Kirby sets out all across Pop Star to get the stars back from King Dedede, eventually defeating him in an unorthodox battle involving cannons. 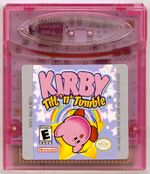 Kirby Tilt 'n' Tumble is played on a unique pink cartridge with a built in gyro-sensor.

Kirby rolling along in Lvl 1-1.

In Kirby Tilt 'n' Tumble, Kirby does not move as he normally would in the main series, but instead rolls around like a marble. To control him, the player will need to tilt the Game Boy Color in the appropriate directions. As such, the stages are built like rolling marble courses in a top-down view similar to that of older The Legend of Zelda games, and Kirby can easily lose a life if he goes over an edge. The main challenge comes from getting Kirby safely over pits and obstacles. This can be aided by having the player flick the Game Boy Color upward to make Kirby bounce over open pits. Other methods of traversal include using items and stage devices like Bumpers, Jump Holes, and Balloons which grant temporary flight, among other objects. Enemies also appear on the stage, though Kirby cannot inhale them, and touching them will usually deal him some damage. Kirby will need to make use of temporary invulnerability or a special item - such as the Microphone - to defeat them. Against bosses, Kirby can fight back by using various methods, usually by launching into their weak points.

Each stage also has a time limit, which can be extended by collecting Stopwatches or passing checkpoint gates on the stage. When the timer drops below 50 seconds, an alarm sounds, along with a message saying "HURRY UP!!", and the music changes to a more fast-paced version. If the timer reaches zero before Kirby reaches the level's end, he loses a life.

There are also a couple of bonus stars which are optional to obtain. Depending on their color, these can have various effects: Warp Stars can take Kirby to bonus areas to get additional 1-Ups, Blue Stars allow Kirby to play a Sub-Game after completing the stage, and Red Stars contribute to unlocking the Extra Game and attaining 100% completion.

Kirby Tilt 'n' Tumble consists of eight levels, each containing four stages. It is possible to skip levels and stages by visiting Whispy Woods in certain areas. Each stage has a Red Star to collect, which are necessary to earn 100% completion.

Once the game is cleared 100%, the Extra Stage opens up, which is a re-run of the regular stages with increased difficulty and less time.

There are five Sub-Games in Kirby Tilt 'n' Tumble, which can be played if Kirby collects a Blue Star and then completes the stage. After beating the game, they can also be replayed freely by selecting the Bonus Star on the world map. On the "Bonus Star!" sub-game menu, the player can choose from any of the five sub-games:

Similarly, Kirby Tilt 'n' Tumble can also be played using the Game Boy Player peripheral of the Nintendo GameCube. The game is incredibly difficult to play this way, as it requires the player to pick up the GameCube console itself and tilt it during gameplay. Aside from its impracticality, doing so can also damage the console and the Game Boy Player start-up disc (although the start-up disc can be taken out once the game is booted up).

The following is a list of staff who have worked on Kirby Tilt 'n' Tumble: