This article is about the items on pedestals containing Copy Abilities found in all main series Kirby games, and should not be confused with Ability Items.

Copy Essences,[1] also known as Enemy Symbols in Kirby Super Star,[2] and Copy Pedestals in Kirby & The Amazing Mirror,[3] are items first introduced in Kirby Super Star, reappearing in its remake, Kirby Super Star Ultra. They have since reappeared - with an identical purpose - in every main series Kirby title, up to and including Kirby and the Forgotten Land (excepting Kirby: Squeak Squad, which instead features bubbles containing abilities).

Each Copy Essence resembles a golden pedestal with a figurine of a certain enemy standing on top or the symbol of a Copy Ability in some games in the series. When Kirby touches such a pedestal, he is instantly awarded the Copy Ability appropriate to the enemy/icon displayed. For example, if Kirby touches a Copy Essence with a figurine of a Blade Knight, Kirby will get the Sword ability. If Kirby already possesses an ability, his current power will be replaced in Kirby Super Star and its remake, as well as in main-series games since Kirby's Return to Dream Land, whereas in other games, nothing will happen until he drops his Copy Ability.[3] Every Copy Essence can be used an unlimited amount of times. Apart from being found sporadically throughout games, they usually appear in unlockable rooms containing most of the game's abilities, as well as featuring prominently in The Arena and similar Boss Endurance modes. 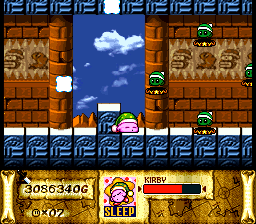 In the Old Tower area in The Great Cave Offensive, Copy Essences for the Sleep ability are used as obstacles guarding a Treasure.

In the Dyna Blade game, stages featuring collections of Copy Essences can be unlocked by hitting the Big Switches in Mallow Castle and in Candy Mountain.

In the Milky Way Wishes sub-game, a special variety of Copy Essence known as Copy Essence Deluxe appears; this item permanently enables Kirby to assume the Copy Ability shown by it at any time and disappears upon being collected.

In Kirby & The Amazing Mirror, two Copy Pedestals appear in each Hub room (small rooms which interlink areas) and three in each room leading up to a Boss fight. The only Copy Abilities that do not appear in a Copy Pedestal are single use ones, Mini and UFO, which must be obtained by swallowing UFO enemies in certain areas or by a Mix. All Copy Essences can be accessed in a Copy Ability Testing Area in Central Circle that requires hitting all the Big Switches to unlock.

The Master sword's pedestal (which appears in the Central Circle after beating the game) essentially acts as the Copy Essence for the Master Copy Ability.

Starting with Kirby's Return to Dream Land, Copy Essences do not resemble the enemies they are obtained from anymore. Instead, they contain a likeness of the Ability Star for the ability in question, displaying the ability's symbol on its face. Kirby can gain access to 20 of these from within the Lor Starcutter once he has collected enough Energy Spheres to unlock every room. 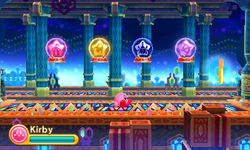 Copy Essences once again remain unchanged in Kirby: Planet Robobot. The only Copy Ability that does not appear in a Copy Essence is UFO, which requires the player to attain 100% completion (which makes UFO appear in the Ability Testing Room) or scan a Kirby amiibo.

A Copy Essence that cycles very fast through different Copy Abilities can be found in Access Ark - Stage 7 EX, The Arena and The True Arena. In the boss endurance modes, this special Copy Essence appears in both the main hub where players select their ability, and between subsequent fights. The exceptions to this are before the fights against C.O.G.S. and Star Dream, which use the Jet Mode and Halberd Mode respectively.

In Kirby Star Allies, Copy Essences once again resemble the enemies/allies who provide them. Kirby can toss a friend heart directly at one to immediately gain the appropriate ally.

Some levels contain big platforms with four empty Copy Essences, called Reset Platforms. If the player holds Y on these platforms, Kirby's current Copy Ability and all of his Friends will be removed then transferred to each of the four Copy Essence pedestals.

After completing the game once, Kirby can access all of the Copy Essences with each ability in Ability Planet. The only Copy Abilities that are not represented in a Copy Essence are limited-use abilities like Crash, Mike, & Festival, which are replaced by their respective enemies in the level. 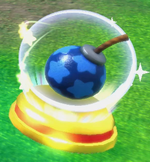 A Copy Essence for Bomb from Kirby and the Forgotten Land.

In Kirby and the Forgotten Land, Copy Essences can appear before boss and mid-boss encounters. Here, they resemble their corresponding Ability Items, but on golden podiums. Notably, if Kirby touches one while using a Mouthful Mode transformation, he will gain the ability without any transformation animation. In most cases, Mid-Bosses now leave behind the Copy Essence corresponding to their Copy Ability after being defeated.