Super Bonkers is a much stronger version of the Mid-Boss Bonkers who debuts in Kirby's Return to Dream Land. He is unique in that he is a Mid-Boss that yields a Super Ability, whereas all the other Super Abilities are yielded by normal enemies. He is more powerful and has more health than Bonkers, and is a bit darker in color as well. 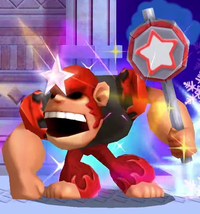 In Extra Mode, Super Bonkers' armored jacket is black with orange flame-shaped trimmings. His hair and pants are red and the trimmings on the pants are orange like the ones on his sleeves. Super Bonkers EX also has a hammer with a gray tone to it. The wooden section of it is red, however.

Even though Super Bonkers is a Mid-Boss, he is not fought in The Arena and The True Arena most likely because he either gives the Grand Hammer Super Ability or fights in a similar fashion to that of regular Bonkers.

Super Bonkers retains many of the same attacks that he used in his normal form. He still uses the same jumping attack, hammer swing, thrown coconuts, spinning hammer move, and Hammer Flip from the Main Mode.

In his EX form, Super Bonkers EX uses all of his previous attacks again (and the newly added flying hammer spin with coconuts move), but with more speed and power.

In Kirby's Return to Dream Land Super Bonkers can be found in the following levels and stages: