Ringle is an enemy that debuted in Kirby: Triple Deluxe. It resembles a small black creature with red feet, blue eyes, and a large golden bell on its head. It is the only enemy in the Kirby series that yields the Bell Copy Ability when inhaled by Kirby.

It simply walks around on the ground, but it is also capable of hovering in the air. If Kirby or King Dedede get close to it, it tolls its bell, and the sound waves that come off of it can harm them if they get too close. Ringle only has a mild amount of HP.

Ringle makes its first (and so far only) appearance as an enemy in Kirby: Triple Deluxe. Ringle is first encountered in the Fine Fields level, and can be sparingly found in other levels (excepting Lollipop Land).

In Kirby: Triple Deluxe Ringle can be found in the following levels and stages:

Although Ringle does not appear physically in Kirby: Planet Robobot, a sticker of it can be collected and applied to the Robobot Armor. 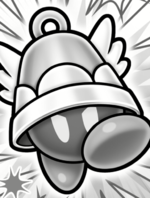 Ringle, as seen in Kirby and the Big Panic in Gloomy Woods!

In the Kirby novel series, Ringle appears as a cameo character in the second volume, Kirby and the Big Panic in Gloomy Woods!.

Here, Ringle, along with his friend Broom Hatter, live in an ancient ruined building within the "Gloomy Woods" area of Dream Land. After the disappearance of "the master" of the place, Ringle is tasked with protecting the sacred crystal located in the ruins, as an obligation made by his past relatives. Rumors of "the master" claim that the ringing of a bell resounds upon its awakening, allowing Ringle to make use of himself by scaring off intruders.

In Kirby and the Big Panic in Gloomy Woods!, Kirby enters the ruins without fear, despite Ringle's bell ringing. After a failed attempt at intimidation, Ringle launches himself at Kirby, only to be inhaled, providing the puffball with the Bell Copy Ability. Later, he is finally released after Kirby and friends go running after the crystal, which had been abruptly stolen. They succeed at this in the end, and the crystal is safely returned to Ringle and Broom Hatter.