Kirby Super Star Ultra is a main-series Kirby game for the Nintendo DS. It is a remake of the Super Nintendo Entertainment System game Kirby Super Star with updated graphics, an updated game engine, and new features. It was released in late 2008 but did not see a release in Europe until a year later, in 2009. It was developed by HAL Laboratory and published by Nintendo.

Kirby Super Star Ultra features all of the content from the original game, including the original six main game modes and the original three Sub-Games. From here, the remake adds a new main game, six sub-games, new multiplayer features, and replaces many of the original cut-scenes with pre-rendered ones in 3D FMV. The game also features updated visuals, updated descriptions and dialogue, and new enemies, Mid-Bosses and Bosses encountered mainly in the new game modes. Many other changes, particularly to the user interface, were made to accommodate the hardware of the Nintendo DS, and many areas of the game support the use of the DS stylus. 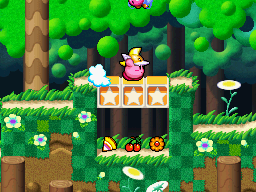 Kirby Super Star Ultra is a side-scrolling two-dimensional platforming game. The difficulty varies with the stage selected, helper used, and level of completion targeted. Kirby begins each stage from a starting point, and his goal is to reach the exit of the stage. Occasionally, stages are ended with a Boss battle, and few stages are time-limited. Other gameplay elements include Kirby's health meter, obstacles along the way (enemies and environmental), unlockable bonus content, and health replenishing or power-up foods such as the Maxim Tomato.

Initially, only the Spring Breeze main game is available on the corkboard, but as the player progresses through the game, more games will be unlocked, including eventually the original sub-games from Kirby Super Star. Each main game's setting and structure are unique to itself, are generally short, and feature their own plot.

Kirby Super Star Ultra has support for multiplayer, both with its main games and the newly implemented sub-games. There is a 2-Player Adventure mode where the player and a friend can cooperatively play in one of the main games, which includes racing each other in Gourmet Race; this requires that both players own a copy of the game. There are also two DS Download Play options that allow for multiplayer with only one cartridge: Group Sub-Games and 2-P Spring Breeze. The former mode allows for 2-4 players to compete in one of the three newly-added Sub-Games. The latter mode, which is similar to 2-P Adventure, allows for two players to cooperate in Spring Breeze, except that the second player can only look at the first player's DS screen.

There are several minor gameplay differences from the original Kirby Super Star, with the most obvious difference being the updated graphical style and gameplay engine, which drastically change how the game feels compared to the SNES original. The controls were altered to be consistent with Kirby: Squeak Squad, which in turn was based upon the control scheme established by Kirby: Nightmare in Dream Land. As a relatively small but still noteworthy change, Kirby can now discard his current ability as an Ability Star by pressing Select. To take advantage of the Nintendo DS's two screens, many user interface elements (such as the health meters, dialogue in Revenge of Meta Knight, and the Copy Essences Deluxe in Milky Way Wishes) were moved to the bottom screen, while the top screen contains the core gameplay.

The game's music was remixed with the Nintendo DS sound chip—it largely sounds the same as the SNES soundtrack, but slightly more compressed. The cutscenes and intro/outro reels are pre-rendered via the Actimagine Video Codec. Once a cutscene is viewed, it can be rewatched from the newly-added Theater. 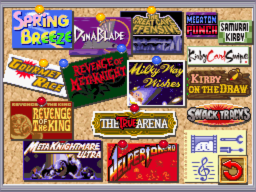 A view of the corkboard menu, with all main and sub-games unlocked.

Kirby Super Star Ultra contains seven main game modes, each completely separate from each-other and acting as if they were entirely separate games, but all sharing the same fundamental gameplay and assets, as well as being connected plot-wise in most cases. These games are unlocked one-after-the-other as previous ones are completed:

These are smaller games with fundamentally different gameplay to that of the main game modes:
Bold games are exclusive to Kirby Super Star Ultra.

These are additional games which have the same gameplay style as the main game modes, but are not canon to the main games, instead acting either as alternate 'what-if' scenarios, or simply as boss endurance modes:

Kirby's Copy Abilities appear again in this game, with instructions on how to use them on the pause menu. They also have a brief description of the ability.

Although Kirby Super Star Ultra has most of the enemies from the original, nearly all enemies have updated appearances, a few enemies are changed, and some are new.

See their articles, as well as the original Kirby Super Star page, for more information. Notes:

The following are portraits for various characters used in some of the main games:

The following is a list of staff who have worked on Kirby Super Star Ultra:

While being a remake of Kirby Super Star, Kirby Super Star Ultra sets a cornerstone that would influence modern Kirby series games going forward, with various tropes, references, and other things in future games connecting back to this game as follows: