This article is about the recurring red and orange butterflies seen typically in cutscenes. For the white butterfly seen in Kirby's Dream Land 3 and Kirby 64: The Crystal Shards, see Flutter.

Butterflies are a common sight in the Kirby series, with several appearing in the intro of Green Greens, but one particular species of red and orange-colored butterfly are a reoccurring appearance through the series, which are typically seen in cutscenes. These butterflies were first seen in Kirby's Return to Dream Land, where one was seen in the opening cutscene for the game, and have made their most recent appearance in Kirby and the Forgotten Land. Morpho Knight is a notable member of these species, as it that initially displays the form of a red and orange butterfly, but later takes the form of a knight after absorbing a powerful being.

It is unknown if all of these butterflies display the same capabilities that of Morpho Knight. It is also unknown if several appearances of these butterflies are of the same butterflies, if some of them are actually Morpho Knight without revealing its identity, or if all of them are different ones. At the very least, in the ending of Kirby: Planet Robobot, two red and orange butterflies have appeared on-screen at the same time, showing that there are multiple of them, while the only ones that are confirmed to be Morpho Knight appear in Kirby Star Allies and Kirby and the Forgotten Land. The Morpho Knight figure in the Japanese version of Kirby and the Forgotten Land uses the term "一頭の夢見鳥", that can be translated as "one of butterflies", but could also mean "the lone butterfly" or "the one butterfly", adding up to the mystery.

The butterflies are rather small, with a total length comparable to one of Kirby's eyes, though specifically Morpho Knight has been shown to be much larger when it goes after Galacta Knight in Guest Star ???? Star Allies Go!. Their wings are consistently depicted as yellow-orange on their insides and red on their edges, though whether the wings smoothly fade from red to orange or have a hard separation between them varies. The butterflies' body is mainly orange.

These butterflies are used as a symbol of peace in the series[1] and are usually seen fluttering around Dream Land, often landing on Kirby when he is unconscious, which is typically enough to wake him up. 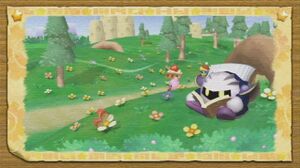 The first red and orange butterfly seen, standing on a flower as Meta Knight reads a book on a knoll in the opening cutscene for Kirby's Return to Dream Land.

One red and orange butterfly first appears in this game's intro cutscene, "A Visitor from Afar", resting on a flower next to Meta Knight while he is reading near the knoll.

Another one, be the same one from "A Visitor from Afar" or not, later appears in the final cutscene, "Each to His Own World", once Kirby and his friends are returned home unconscious by Landia. It initially lands on Kirby's face and wakes him up, which makes the butterfly fly away. Later, when King Dedede pulls his head out of the ground, the butterfly comes back and lands on a flower placed on King Dedede's head. The butterfly hops off his head after he looks up to see Landia and the Lor Starcutter, and is then seen flying away as the cutscene ends.

One butterfly can be seen briefly at the very start of "Waking to a flowery coup!", the opening cutscene for this game. It lands on Kirby's head as he leaves his house in the morning to go frolicking.

Much like in Kirby's Return to Dream Land, a butterfly lands on Kirby's head in the final cutscene, "Restored to Life", which wakes him up after Meta Knight deposits him unconscious near a tree. The buttefly flies away, and presumably the same butterfly is then seen flying on top of the mains of Castle Dedede. While King Dedede and a Waddle Dee emerge from the castle's remains, two more butterflies appear and flutter around them for a bit, before flying away.

Morpho Knight in its butterfly form appears and approaches Galacta Knight, intent on absorbing him.

One butterfly appears in the Story Mode intro cutscene, "Starfall: A Rude Awakening", flying around Whispy Woods while the Jamba Heart pieces are raining down on Popstar. One may also appear over the bottom-right waters on the world map of Dream Land on occasion.

Another butterfly later appears at the end of Guest Star ???? Star Allies Go!. Here, after Hyness is defeated at The Divine Terminus, Galacta Knight emerges from a portal and prepares to face down the allies. Just after his title card, the butterfly flutters down, now glowing ominously. It lands gently on Galacta Knight's lance and shortly after, causes this greatest warrior in the galaxy to be vaporized. It then absorbs this power and morphs while revealing itself as the knight of the underworld, Morpho Knight, before attacking the allies.

A Butterfly also makes a cameo in the Celebration Picture "A Farewell to Kirby", depicted in monochrome.

It is unknown if the butterfly that appear "Starfall: A Rude Awakening", the one that can appear on Dream Land, and the one of "A Farewell to Kirby" are Morpho Knight or if they are different ones.

A butterfly in the opening scene for Kirby and the Forgotten Land.

A butterfly makes a brief appearance in the opening cutscene, "Kirby and the Mysterious Vortex". Here, it can be seen being sucked into the dimensional rift along with Kirby and the Waddle Dees. One butterfly appears at the start of The Brawl at the Mall, on top of a sign just next to where Kirby starts, which flies away if Kirby or Bandana Waddle Dee approaches.

Another butterfly later appears in Forgo Land at the end of Isolated Isles: Forgo Dreams, where it flies in and lands on Soul Forgo, transforming and revealing itself as Morpho Knight.

It is unknown if the butterfly being absorbed into the rift in "Kirby and the Mysterious Vortex" and the one in The Brawl at the Mall are Morpho Knight or not.