Kirby's Return to Dream Land Deluxe is an upcoming remake of Kirby's Return to Dream Land, releasing for the Nintendo Switch on February 24th 2023. It will feature the same story and gameplay as the original, but with a handful of new additions, most notably the new Mecha and Sand Copy Abilities,[1] the Festival ability from Kirby Star Allies, and a revamped collection of Sub-Games housed in the new location Merry Magoland, a festive castle-like structure that resembles Magolor.

While the game features the same side-scrolling 2.5-D gameplay as the original, the graphics have been given an overhaul, giving all the characters strong outlines and increasing the detail and contrast. In addition, the characters (most notably King Dedede) have been updated to their modern looks. Other visual changes include enemies splatting against the screen when hit by Super Ability attacks.

The game is available in all languages that Kirby's Return to Dream Land was originally available in, along with new translations in Dutch, Brazilian Portuguese, and Chinese (both Simplified and Traditional).

Kirby's Return to Dream Land Deluxe features every Copy Ability from the original game[2] in addition to the new Mecha and Sand abilities, as well as Festival, making it the first remake to add Copy Abilities that were not in the original game (although introducing new abilities was considered for the previous remake, Kirby Super Star Ultra, the idea was ultimately scrapped[3]). It is also known that some abilities were given updated movesets.

The following are all the known Copy Abilities in Kirby's Return to Dream Land Deluxe, along with other known details:

Like in the original game, Kirby has access to five Super Abilities which are more powerful versions of regular abilities. They are as follows: 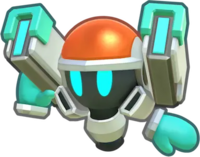 The new enemy, called アーマロイド (Armoroid) in Japanese,[4] that provides Mecha when inhaled.

Based on the footage and premise, it is likely that most, if not all of the enemies, mid-bosses, and bosses in the original Kirby's Return to Dream Land will be returning in this remake. However, aside from the ones seen in prerelease material, none can be explicitly confirmed to appear, as it may be the case that an old enemy gets replaced by another, as has happened in cases such as Bounder, Togezo, and Rolling Turtle in previous games.

The following enemies have been spotted in trailers and other prerelease material for the game:

Wide view of Merry Magoland, with all the Sub-Games visible.

Kirby and friends arriving at the park via Warp Star.

Merry Magoland is a new area of the game where Kirby and up to three other players can participate in competitive Sub-Games. This replaces their previous location on the Lor Starcutter in the original game, but in return, there are far more than in previous games, with most returning from older games in the Kirby series.

The Sub-Games are hosted by Manager Magolor, who gives Kirby tips and, if the player is connected to Nintendo Switch Online, will share data from other players around the world, like Wise Waddle Dee in Kirby and the Forgotten Land. Despite this, Merry Magoland is same system-only, with no local communication or online multiplayer. Playing Sub-Games will accumulate stamps, which unlock cosmetic character masks or items for use in the main game.[5]

The following Sub-Games are confirmed to appear:

Other differences from Kirby's Return to Dream Land[edit]