A Fuse is an object that connects to a Fuse Cannon or other object. It consists of a long rope that can stretch across an area, usually embedded in the ground, which can be lit on the free end by a Fire-based attack.

Fuses are lit with the express purpose of firing a Fuse Cannon. Once the fuse is lit, the spark will travel along the length of the fuse until it reaches the cannon, wherein the cannon will fire. Kirby has that time to jump into the cannon if he wants to be fired to a new location. Should he fail to get inside before the cannon goes off, the fuse will regenerate, taking the same shape as it had before (except in Kirby's Adventure, where Kirby will actually need to leave the area with the fuse end and come back to regenerate it, like how enemies respawn).

In Kirby: Triple Deluxe, fuses could be split, with pieces laying on a Tilt Fuse Box. In cases like these, the player would need to tilt the Nintendo 3DS system to line up the ends of the fuses to burn them through.

Fuses appear in the following games: 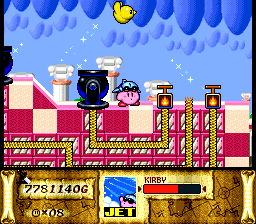 A series of fuses in the Garden area in The Great Cave Offensive, most of which are attached to detonators.