Max Flexer[1] is a dancing fitness-oriented monster who first appeared in the Kirby: Right Back at Ya! episode Fitness Fiend. He is sent by Night Mare Enterprises in order to subject both Kirby and King Dedede to a deadly exercise course meant to terrorize and then kill them, though it ends up backfiring by allowing Kirby to return to normal and then defeat Max Flexer using the Mike Copy Ability. Max Flexer also makes a cameo appearance in the Kirby Mass Attack Sub-Game Kirby Quest in one of its stages.

Max Flexer is a small, buff, eccentric fitness trainer with a massive mouth and a pair of sunglasses backed by a head of puffy pink hair. His skin is glossy brown, and he wears a yellow athletic shirt with a red stripe down the middle. He also wears red arm bands and has a head-set with a microphone attached. Instead of legs, he has Kirby-like feet which are white.

Max Flexer attacks his targets by subjecting them to a fitness routine which involves heavy use of machinery to manipulate the targets in various ways. As he does this, he sings to a work-out song and keeps his feet moving, dancing to the rhythm. His set-up, singing, and music greatly resembles that of a disco chamber, complete with a disco ball that opens up to reveal a crushing iron ball which he tries to use to finish Kirby off. 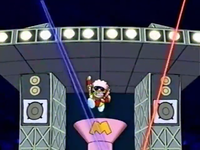 Max Flexer starting up his fitness routine in Fitness Fiend

In Fitness Fiend, Max Flexer is called in by King Dedede as a quick fix-up method to cure him of his morbid obesity caused by eating the potato chips meant for Kirby. As Kirby had a hearty helping of these chips as well, both of them are subjected to several questionable and dangerous machines meant to force them to move their bodies and burn the fat. The last of these machines is an iron ball which was meant to crush and kill Kirby, but instead merely causes him to spit out all the chips he ate, returning him to his normal state in an instant. From here, Kirby inhales and swallows the head-set that Max Flexer was wearing to gain the Mike Copy Ability, and then finishes him off by singing at him.

Max Flexer makes a cameo appearance in the Kirby Mass Attack Sub-Game Kirby Quest. Here, he is encountered in Stage 17, serving as a special round. He has 330 HP and defeating him yields the Kirbys a Maxim Tomato, though if they miss any attacks, he disappears.