Clanky Woods is a mechanized version of Whispy Woods that appears in Kirby: Planet Robobot, appearing primarily as the boss of Patched Plains; the first level of the game. Among other things, the Haltmann Works Company outfitted Clanky Woods with spider-like legs with drills for tips, which greatly increases its mobility and attack power, along with parts that allow it to shoot missiles and modify the environment using a giant screw. Kirby first encounters this mechanical monstrosity in Stage 1 of the level, where he has to outrun it, but later fights the boss in proper fashion in a circular arena. Much later on, Clanky Woods appears again in Stage 8 EX of Access Ark, where Kirby dispatches it much more quickly using the Robobot Armor. In Meta Knightmare Returns and The True Arena, Clanky Woods is upgraded into Clanky Woods 2.0 instead.

In its debut appearance, Clanky Woods is encountered three times during the story. Its first appearance is toward the end of Stage 1 of Patched Plains. After Kirby enters the area, a bunch of fleeing Waddle Dees pass him by. From there, Clanky enters the scene using its four drill legs, roars upon noticing Kirby, and starts to chase him down. During this phase, Clanky can be attacked and defeated, but it is only necessary to escape it by continuing to the left. Defeating Clanky here however, will reward Kirby with the stage's rare sticker. 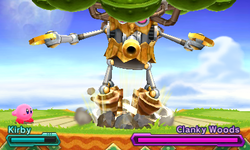 Clanky uses a Drill Drop in Phase 1 of the fight.

The second time it is encountered is in the Boss stage itself. It first appears on a platform resembling half a ring, roars at Kirby once again, then the fight begins.

The following lists all of Clanky Woods' attacks in Kirby: Planet Robobot.

Clanky Woods attacks in a fixed order on loop in Story Mode and The Arena as follows: 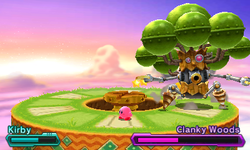 Clanky Woods attempts a Dash Charge in Phase 2 of the fight.

When Clanky is knocked down to half of its stamina, it falls off the stage. Then the platform is extended to include an extra semi-circle ring half to make the full ring. Clanky then emerges from a large screw platform in the middle, jumps on the back-side of the ring and roars again. The fight then continues, with Kirby and Clanky battling around the ring, as opposed to the flat area earlier.

In this phase, Clanky Woods will always start with the Dash Charge and Drill Attack moves. After that, its attacks are primarily based on Kirby's positioning. 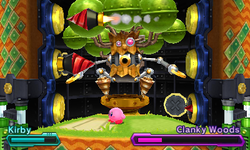 Drills enter Kirby's space while Clanky sits in the background in Phase 3 of the fight.

When Clanky's stamina is nearly depleted, it causes all the sections of the ring that Kirby is not standing on to rise up, forming walls and trapping Kirby in a narrow space. Clanky then occupies the central area, where it cannot be directly hit, much like HR-D3's first phase in Kirby's Return to Dream Land. It can still be hit when performing certain attacks, however.

In Story Mode and The Arena, Clanky Woods attacks in a fixed order on loop as follows:

Once Clanky is defeated, it is ruptured by small internal explosions, and rendered inoperable. Unable to move, it sits in the middle of the arena and cries tears of oil as Kirby does his dance and finishes the level.

After the boss fight, Clanky is encountered one more time in Access Ark, Stage 8-EX. Here, Kirby can use the Robobot Armor to defeat it during another chase-down sequence. 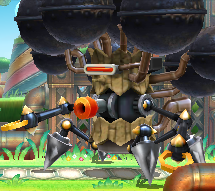 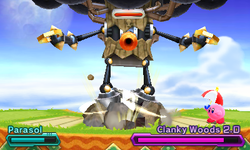 Clanky Woods 2.0 drills into the ground. 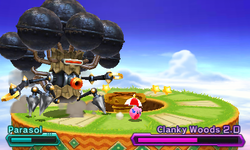 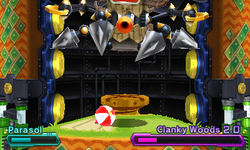 Like most other main bosses in the game, Clanky Woods has an upgraded variant, Clanky Woods 2.0, which is fought in both Meta Knightmare Returns and The True Arena. It bears a black canopy, a single wide eye, and is in general darker compared to its normal form.

The following lists all of Clanky Woods 2.0's attacks in Meta Knightmare Returns and The True Arena. Attacks that are used in multiple of the fights phases are summed up.

In phase 1 in Meta Knightmare Returns and The True Arena, Clanky Woods 2.0 always starts with these attacks:

Afterwards, it attacks in a fixed order on loop as follows:

In phase 2 in Meta Knightmare Returns and The True Arena, Clanky Woods always starts with Dash Charge 2.0. After that, the rest of its attacks in this phase are randomly chosen.

In phase 3 in Meta Knightmare Returns and The True Arena, Clanky Woods 2.0 attacks in a fixed order on loop as follows: