Twister is a yellow-orange spinning top enemy who is the main source for the Tornado Copy Ability and who first appeared in Kirby's Adventure. Twister bears a shiny metallic body: its bottom part is pointed and darker than the rest of its body, while the top part is a lighter shade of orange and has spherical extensions attached to it. As the games have progressed, Twister has gained more subtle details such as crease lines along its surface to distinguish its metal plates. Twister tends to hold position on the ground until approached, from there spinning itself up into a small tornado and hovering off the ground.

Twister has appeared (or at the very least been referenced) in every Kirby game which features the Tornado Copy Ability, with the exception of Kirby Air Ride, where it is replaced with the enemy Caller. It has also made some appearances in other Kirby games which do not feature Tornado. 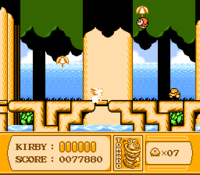 Twister debuts in Kirby's Adventure, although its design is different from its final one; its lower half is black and appears rounded instead of pointed. The game's remake, Kirby: Nightmare in Dream Land, however, portrays Twisters in the same way as later games of the series.

Twisters are initially stationary, slowly rotating in place, but as soon as Kirby gets near, they quickly increase their spinning speed greatly, lifting off into the air and transforming themselves into a living tornado that flies through walls and can only be harmed by a few Copy Abilities. After a while, provided that it is not currently inside a wall, the Twister slows down, eventually becoming stationary and vulnerable to any attack once more.

A singular, immobile Twister appears in the Museum of Yogurt Yard, providing Kirby with the Tornado ability.

Twister is a fairly uncommon enemy, appearing in only a small handful of stages. Twister can be found in the following levels and stages:

Two Twisters appear at the top of the "Wispy-Woods Land" board, held up by two large Kirbys, in Kirby's Pinball Land.

Twister appears as an enemy at the very top of the "Wispy" course, appearing on both sides. When Kirby passes a Twister, it will begin spinning, adding 100 points per spin. How many times it spins depends on how quickly Kirby passes through it.

Twister appears in this game as one of the enemies to bump into on the courses. Defeating it yields the Tornado ability to Kirby. In this game, Twister comes in blue.

In Kirby's Dream Course, Twister can be found in the following courses:

Twister appears as a common enemy in this game and holds place. It yields 300 points when defeated and drops the Block Flip item.

In Kirby & The Amazing Mirror, Twisters reappear, looking and acting the same as in Kirby: Nightmare in Dream Land. Here, they are comparably rare, appearing sparsely in Rainbow Route, Moonlight Mansion, Mustard Mountain, and Peppermint Palace. Besides appearing as enemies, they can be seen atop the golden socket of the Tornado ability's Copy Essence.

In Kirby: Canvas Curse, Twister is a rare enemy, only appearing one or two times throughout the whole game. It yields Tornado as usual.

In Kirby: Canvas Curse, Twister appears in the following locations:

In Kirby: Squeak Squad, Twister is an uncommon enemy, making more appearances than it did in in Kirby: Canvas Curse and Kirby & The Amazing Mirror. In addition to this, Twister can now be playable through the way of the Ghost ability. When possessed, Twister can be made to move left and right (slowly) and to start spinning. Unlike other enemies, Twister is incapable of jumping normally, but it can gain height if its tornado spin is used repeatedly.

Twister can be found in the following levels and stages:

Twister appears in the Kirby Mass Attack Sub-Game Kirby Brawlball. It occupies the upper-left portion of the board. Every time a Kirby passes by it, it spins, granting a total of 50 points to the player and making Bouncys appear on the left side if they are not already there.

Twister makes its debut 3D appearance in this game. Here, it mainly sits in place until prompted to start its tornado spin. Even when spinning, however, it can still be inhaled by Kirby, so it is not terribly dangerous.

In Kirby's Return to Dream Land, Twister can be found in the following levels and stages:

Twister appears as a randomly-obtained Keychain in this game, taking its sprite appearance from Kirby: Nightmare in Dream Land.

In Kirby Battle Royale, a Headgear called Twister Helmet can be purchased for 750 Battle Coins for the Tornado Ability. The description states it is a living Twister.

Twister spinning itself up in Kirby and the Forgotten Land.

After a 10-year absence as an enemy, Twister appears in Kirby and the Forgotten Land. It often spins in place or can chase Kirby down while spinning. It can spin for quite a while, so it is more dangerous than it looks.

In Kirby and the Forgotten Land, Twister can be found in the following stages: