This article is about the large cooking machine with multiple units, and should not be confused with Slice n' Splice, or the Domestic Servant Robot.

SlicerDicer is a large mechanical robot monster that appears in the Kirby: Right Back at Ya! episode Cooking Up Trouble. It is separated into individual parts and used as food processors in a cooking contest hosted by Channel DDD. After the parts combine into the monster, SlicerDicer, Kirby finds himself unable to focus as he battles the monster due to its ability to shoot food, so Meta Knight takes action and plunges the Galaxia into the SlicerDicer, which creates sparks that Kirby inhales to gain the Spark Copy Ability. He then uses his electricity from within the SlicerDicer, which causes it to malfunction and ultimately blow apart.

The SlicerDicer is a large machine that consists of several mechanical units which are able to be detached and separated into individual components. It has two arms that wield a three-barreled cannon at the end of each which act as a sort of vacuum. It also holds a large triple-door dishwasher with two large blades that jut from its sides, which is set upon its back. It moves about by using three continuous tracks that are located underneath it, and atop it is a cockpit that is enclosed by glass, in which is used to control the machine's actions. The SlicerDicer also sports a siren atop it and a small orb in the shape of King Dedede's head on the front of the cockpit.

The SlicerDicer is a bulky machine that is capable of drawing in objects - mainly food - and launching them through multiple of its mechanisms. It is also quite fast for its large size, and is able to twist and turn just as quickly. This makes damaging its outer body difficult, as it is able to quickly ward off nearly anyone who attempts to strike it.

Role in Cooking Up Trouble[edit] 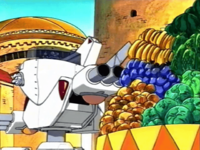 The SlicerDicer prepares itself with food to fire at Kirby.

The SlicerDicer appears in the episode, Cooking Up Trouble where it is advertised on Channel DDD as individual food processors as a scam to get others to buy the SlicerDicer for King Dedede, since he is unable to buy it due to his overdue bills. After the male Cappies and others buy the machines in order to cook with them, King Dedede and Escargoon further extend their plot by hosting a cooking contest in order to gather the separated parts into one place. Once all of the units of the SlicerDicer are gathered at the contest, King Dedede combines them into the monster, SlicerDicer, which he and Escargoon take control of from its cockpit. They then use the SlicerDicer's ability to fire food to distract Kirby, which allows the SlicerDicer to batter him while he tries to eat.

The male Cappies then discover that electricity is the monster’s weakness from their food processor manuals. Meta Knight - overhearing this - launches himself toward the SlicerDicer and uses the Galaxia to spawn sparks from it. Kirby then inhales the sparks - gaining the Spark Copy Ability - and jumps into the SlicerDicer and shoots electricity through its internal system, which causes the SlicerDicer to malfunction and ultimately be destroyed. Its overheating prior to its destruction causes King Dedede and Escargoon to be cooked inside as if they were in a microwave oven, and once ejected from the cockpit, they are "served" on a plate with garnish.

Names in other Languages[edit]