Kirisakin is a formidable blade-wielding gorilla-like monster that appears in the Kirby: Right Back at Ya! episode Crusade for the Blade. Before the events of the episode proper, it was said to be the monster responsible for stealing and keeping the Galaxia for eNeMeE before the sword was recovered by Meta Knight and Garlude, though it ended up killing Garlude in the process. In the episode proper, it is sent to Dream Land in order to kill Sirica and recover the Galaxia once again, but it is stopped by Kirby after he picks up the sacred sword and slays Kirisakin with it.

Kirisakin is a giant furry creature which somewhat resembles a silverback gorilla, though its fur is largely purple in color and it sports long blades instead of hands. It also has red eyes and blades coming out of its face along with its sharp teeth. Kirisakin is deadly in combat, able to make swift strikes with its blades and pounce on its foes using its incredible speed and girth. If its blades are damaged or broken, Kirisakin can rapidly regenerate them.

Role in Crusade for the Blade[edit] 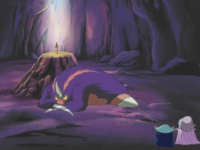 Kirisakin guarding the Galaxia in its cave in a flashback scene.

Main article: Crusade for the Blade

Prior to the events of the show, Kirisakin was sent by eNeMeE to steal the sacred blade Galaxia and guard it in a dark cave on an unknown world. Meta Knight and Garlude were sent by the Galaxy Soldier Army to recover this sword and were successful, though Garlude was slain by Kirisakin in the process.

During Crusade for the Blade, Kirisakin is sent to Dream Land after King Dedede requests a monster to go after Sirica. Kirisakin soon finds Sirica and interrupts her fight with Meta Knight to try and reclaim the Galaxia. Using its blades and its ferocity, Kirisakin beats back Sirica, then Sword Knight and Blade Knight, then nearly defeats Sword Kirby as well. However, after learning the truth of her mother's death from the Galaxia, Sirica tosses the sword to Kirby and he uses it to cleave Kirisakin in half, finally killing it.