This article is about the battleship in the general context. For the stage in Kirby's Epic Yarn and Kirby's Extra Epic Yarn, see Battleship Halberd (stage). For the Robobot Armor mode, see Halberd Mode.

The Battleship Halberd (often referred to in short as simply Halberd) is a giant mechanical flying warship which Meta Knight commands and uses as his main base of operations. With the help of a motley crew of Popstar's residents - most notably the Meta-Knights, Captain Vul, and Sailor Waddle Dee - Meta Knight uses the ship as a display of his power, authority, and leadership. The Halberd is equipped with two primary Sail Wings to catch the wind, a series of powerful thrusters fueled by the Reactor (which is powered by Wheelies), and a large array of defensive turrets, the most notable of which being the mighty Combo Cannon. At the bow of the ship is a giant replica of Meta Knight's mask, making it hard to mistake who the ship belongs to. The Halberd is capable of operating in the air, underwater, and even in deep space.

The Halberd was first introduced in Kirby Super Star, where it is the primary setting of the game Revenge of Meta Knight, wherein Kirby infiltrates the ship and gradually blows it to pieces in order to stop Meta Knight from using it to take over Dream Land. Since then, the Halberd has made a number of notable reappearances in the Kirby series. For instance, it is repaired and made operational again in Kirby: Squeak Squad, with some stages of Secret Sea and Gamble Galaxy taking place upon it. Additionally, in Kirby's Epic Yarn, the Halberd is a stage in Dream Land. Furthermore, in Kirby: Planet Robobot, Kirby and Meta Knight team up and fuse the Robobot Armor with the Halberd into the mighty Halberd Mode in order to take on Star Dream.

The Halberd appears as a prominent stage and setting in the Super Smash Bros. series, starting with Super Smash Bros. Brawl. It also appears in the anime series Kirby: Right Back at Ya!, where it is used by Meta Knight and the Dream Landers to take on eNeMeE by assaulting his space fortress.

The Halberd in a cutscene of Kirby Super Star Ultra.

The Halberd makes its debut appearance in Kirby Super Star (also appearing in Kirby Super Star Ultra) where it is the principal setting and central plot point of Revenge of Meta Knight. In this first appearance, Meta Knight and his crew prepare to take off using the ship, and use its might to subjugate all of Dream Land (presumably wrestling control away from King Dedede). Seeing this as a threat, Kirby rides in and attempts to board the ship multiple times, being repulsed all but the third time by the crew. Once Kirby manages to get on board, Meta Knight's crew panic as they desperately try whatever they can to get Kirby off, but as they repeatedly fail at this task, Kirby worms his way through the ship and damages critical components of it. He starts by disabling the Combo Cannon, then breaks both wings while defeating Heavy Lobster, then goes in for the critical blow by disabling the Reactor and freeing the Wheelies. From here, Kirby makes his way to the bridge as most of the crew evacuate and battles Meta Knight directly, defeating him in an honorable sword duel. After this, Kirby makes his escape in the nick of time by riding one of the leftover Wheelies while Meta Knight tries his best to take Kirby down with the ship. Ultimately, Kirby is able to hop off the ship as it crashes into the ocean, and he rides off into the sunset, having saved Dream Land from another threat to the peace.

In addition to its appearance in Revenge of Meta Knight, the Halberd is also briefly a setting in the Kirby Super Star Ultra-exclusive mode Meta Knightmare Ultra, where Meta Knight (for some reason) destroys his own ship. 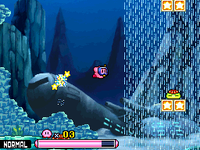 The Halberd laying at the bottom of the ocean in Secret Sea, in Kirby: Squeak Squad

In Kirby: Squeak Squad, the Halberd is seen laying at the bottom of the ocean in the level Secret Sea, presumably where it had ended up after the events of Kirby Super Star. Several stages take place inside the ship, including the boss fight with Meta Knight. During this fight, the Halberd actually takes off again, serving as a transition to the final level, Gamble Galaxy. Here, the first stage takes place on the deck of the Halberd, though now in space, showing off the ship's ability to achieve escape velocity.

The battleship serves as the final stage in Kirby's Epic Yarn and Kirby's Extra Epic Yarn. Here, Kirby uses the Starship transformation in a horizontal-scrolling shooter level to take on the many enemies of the battleship. He also combats the Halberd cannons and the Reactor. The background music for this level is an acoustic, jazzy rendition of the exterior Halberd background music from Kirby Super Star (though the in-game description for the song's CD in the American version incorrectly states it as being from Kirby's Dream Land). A similar acoustic rendition of the same theme can be heard in a stage medley on the soundtrack for Kirby Super Star Ultra.

Prior to the stage itself, the Halberd is briefly featured in one of the cutscenes, namely, the one where Meta Knight is captured by Yin-Yarn.

In Kirby's Extra Epic Yarn's Sub-Game Slash & Bead, Battleship Halberd is the setting of Stage 4, once again featuring both Halberd cannons and the Reactor. Additionally, one of the Fuse Bead Mats for Slash & Bead depicts the Halberd.

In Kirby Mass Attack, the Halberd appears as Stage 5 of the Sub-Game Strato Patrol EOS, appearing out in deep space. the Kirbys have to approach it from the side and then enter and fly through a central metal hallway full of enemies and traps before battling Meta Knight as the boss of the stage. The Halberd does not appear in the main Story Mode for Kirby Mass Attack. 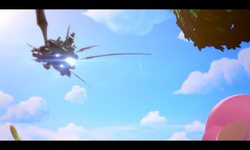 The Halberd in the ending cutscene of Kirby: Planet Robobot.

In the introductory cutscene for Kirby: Planet Robobot, Meta Knight orders the Halberd to attack the planet-sized spaceship sent down by the Haltmann Works Company to take over Popstar. The battleship does not make it very far before it is shot down by a powerful laser from the colossal spaceship. Meta Knight is then captured by the Haltmann Works Company, with the fate of the ship uncertain for the moment.

Just before the final battle with Star Dream, Meta Knight returns with the Halberd (somehow repaired and able to fly again), and asks Kirby to hop on board the ship. Kirby instead uses the Robobot Armor to scan it, forming the Robobot Armor Halberd Mode. Using this new weapon, they battle Star Dream and its many forms in space above Popstar. Towards the end of the battle, Meta Knight ejects Kirby and the Robobot Armor from the ship, undoing the fusion and returning the Halberd to normal. It is seen again in the ending cutscene, where Kirby waves at it before chasing it.

The Halberd Mode is also used to engage Star Dream Soul OS in The True Arena. 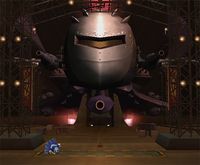 The Halberd, as seen in Super Smash Bros. Brawl.

Role in The Subspace Emissary[edit]

In Super Smash Bros. Brawl, the Halberd plays a prominent role in the Adventure Mode: The Subspace Emissary. Here, the ship is stolen from Meta Knight and used by the Subspace Army to deliver Shadow Bugs and Subspace Bombs across the world. While under the enemy's control, the Halberd engages with the Great Fox and its Arwings, ultimately bringing them all down, while the other characters try to chase after the ship. Eventually, a group of heroes along with Meta Knight himself manages to get back on board and wrestle control of the ship away from the Subspace Army. Later on, Meta Knight sacrifices the Halberd to a blast from the Subspace Gunship in order to buy the others some time to launch an assault using their smaller and nimbler vessels. 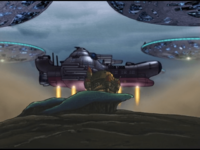 The Halberd rises behind Castle Dedede to take on eNeMeE and his Destroya fleet.

The Halberd features prominently in the last three episodes of Kirby: Right Back at Ya!. Here, it was constructed in secret by Meta Knight and his apprentices Sword Knight and Blade Knight, who have been working on it ever since they first arrived in Dream Land. The purpose of this project was to construct a weapon powerful enough to take on eNeMeE and his massive space station. Its existence is not revealed to the rest of the Dream Landers until Cappy Town Down, right after Cappy Town is destroyed by an invading Destroya sent by Night Mare Enterprises. The Cappies are reluctant to help man the ship at first, but when even more Destroyas come to pulverize Dream Land, Kit Cosmos arrives and persuades them to join in.

From there, the Halberd takes off and shows off its power by destroying every Destroya with a single shot from its mighty cannons. The Halberd then flies into outer space and initiates warp speed to travel to eNeMeE's Fortress. On the way, it is attacked by Heavy Lobster, but Kirby and the crew mange to destroy it before it damages the main engine. Once the Halberd arrives at the fortress, it is set upon by the defensive turrets and Destroya armada. These prove to be too much for the Halberd to handle on its own, but backup comes in the form of three rogue Destroyas piloted by Kirby's allies. The Halberd manages to make it into the fortress and deliver its crew intact to the interior chamber, but it is eventually destroyed when more turret fire and Destroyas eventually do it in. The explosion from the ship does manage to take out the last of the defenses inside the fortress, however.

Differences from the games[edit]

The Halberd is portrayed very differently from its appearances in the video games. While it retains its primary structure, it lacks the wings that define the ship in its other appearances, and has an overall smoother and bulkier design. It is also not run on Wheelie power, but instead features a singular main engine that is powered by an unknown fuel source. It also lacks a Reactor. Most notably, the Halberd in the anime has much more potent fire power, as its cannons are able to shoot down giant spaceships in one go, whereas the cannons on the Halberd in the games are unable to shoot down Dyna Blade before Kirby manages to board.