This article is about the electric Copy Ability present in most Kirby games, and should not be confused with Plasma.

Spark is a recurring Copy Ability in the Kirby series that debuted in Kirby's Adventure and has since been established as one of Kirby's most iconic and common abilities, alongside powers like Fire and Ice, particularly due to being among the few abilities to appear in Kirby's Dream Land 2, Kirby's Dream Land 3 and Kirby 64: The Crystal Shards. It has similar properties to Plasma, another electricity-based power.

Spark is normally of the defensive type, like Freeze or Needle, which means Kirby will station himself in one position while executing the power as it surrounds his body and destroys enemies that make contact with the barrier. Starting with Kirby: Squeak Squad, however, Spark started to gain attributes that made it more similar to Plasma, by allowing Kirby to charge up and release energy projectiles. This was further established in Kirby's Return to Dream Land when Spark was given additional powers, which led to the general assumption that Spark and Plasma were being fused into the singular Spark, similar to how Fire and Burning and Ice and Freeze were combined. However, this assumption was overturned when Plasma returned in Kirby Star Allies, this time being reworked to incorporate elements from Spark. It is now unclear which ability will dominate going forward, as both are now very similar, with only a few visual and move-set differences. 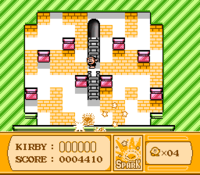 The Spark ability first appeared in Kirby's Adventure, Kirby can shoot sparks of electricity out of his body in a defensive move similar to Needle. It is provided by Sparky.

In Kirby: Nightmare in Dream Land, Kirby gains a hat that resembles that of Plasma.

Spark returns in Kirby's Dream Course. It can be used to defeat Whispy Woods and Kracko, and it is the only way to defeat them. Unlike the other abilities, Spark does not provide any movement changes. The ability is obtained from Sparky.

Spark reappears in Kirby's Dream Land 2. Kirby acquires this ability from Master Green and Sparky. By itself, this ability performs similar to the one in Kirby's Adventure.

Throughout Kirby's Dream Land 2, there are specific blocks which can be broken only with the Spark ability. They resemble dark circuit boards.

In Kirby's Block Ball, Spark is one of the four abilities that Kirby can utilize, obtaining it by colliding with Sparky. When using this ability, Kirby flares up with electricity, causing him to break most blocks he passes through while the electric field is active. Unlike the other abilities, Spark does not affect Kirby's trajectory. 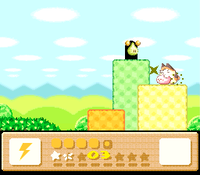 In Kirby's Dream Land 3, combining Spark with Nago results in an attack where Nago rubs Kirby to give him static, then can roll him into enemies to defeat them with shocks.

Throughout Kirby's Dream Land 3, there are specific blocks which can be broken only with the Spark ability. They are marked with the Spark icon on them.

Spark is one of the base abilities that appears in Kirby 64: The Crystal Shards. There are a fair number of enemies that provide it this time around, including Sparky, Plugg, and Zoos. On its own, the ability functions like normal, with Kirby generating a small spark barrier around himself. When combined with another ability or itself to make Power Combos, Spark creates a wide variety of different moves with varying functions, from a refrigerator that produces food to an electric quarterstaff.

In Kirby & The Amazing Mirror, Spark appears as an ability, unchanged from its appearance in Kirby: Nightmare in Dream Land. It is once again provided by Sparky.

In Kirby: Squeak Squad, there is a special mechanic unique to this game in Cushy Cloud - Stage 5, where Spark Kirby can use his spark attack to power clouds, causing them to move while holding the barrier up. In addition, after collecting the Spark Ability Scroll, Kirby gains the ability to charge up and release Plasma waves, marking the first time the abilities were merged to a degree.

In Kirby: Canvas Curse, Spark's main function was changed. Instead of simply covering a small area around him, a smaller area is covered, and a line of electricity appears, hurting any enemy above Kirby. If Kirby keeps using Spark while in mid-air, he will hover.

Kirby using the Spark ability in a pre-release version of Kirby's Return to Dream Land.

The ability reappears in Kirby's Return to Dream Land and its remake, Kirby's Return to Dream Land Deluxe, where, in addition to generating the familiar barrier of electricity, it enables Kirby to fire lightning upwards or downwards. It has been combined with the attributes of Plasma, letting the player "charge" the ability by rotating the directional pad or shaking the Wii Remote and discharge it in form of a projectile.

Spark Attack cannot be performed while there is any amount of Charge Power.

Spark appears in the New Challenge Stages Sub-Game, looking and behaving exactly as it did in Kirby's Return to Dream Land. There is a challenge stage in Happiness Hall dedicated to the ability, and it can be used in some of the races against Magolor.

Spark returns in this game, functioning almost identically to the way it did in Kirby's Return to Dream Land, this time lacking the Thunderbolt and Lightning Strike moves. It can be obtained from Sparky, as well as Queen Sectonia's Green Antlers and Floral Spark Bullet.

The Spark ability appears in Kirby: Planet Robobot, where its electrical properties come in handy when powering wires and circuits. In this game, there are many attacks and defenses which Kirby can use when he takes this form, as he regains the moves he lost in Kirby: Triple Deluxe. It is also compatible with the Robobot Armor, giving the mechanical suit an extremely powerful plasma cannon.

The Spark Copy Ability makes four distinct appearances in the anime series Kirby: Right Back at Ya!. Though it first appears in the Kirby of the Stars Pilot, its first appearance in the proper series is in Dedede's Raw Deal. Using this ability, Kirby changes color to green and is able to generate powerful fields of static electricity, and can also fire balls of lightning at his opponents.

Spark Kirby's hat resembles the one he was given in Kirby: Nightmare in Dream Land, though it changes the design of the tiara and changes the energy coming out of the hat to make it more triangular, and the design of this variant of the hat carries forward to the later games in the Kirby series. Spark Kirby also looks identical to how he does in his artwork from that game, suggesting that it was possibly the animators' only reference. The anime version of Spark also references the similar Plasma ability during Kirby's transformation sequence, as he starts with a head of teal fire resembling the Plasma hat before gaining the proper Spark hat. 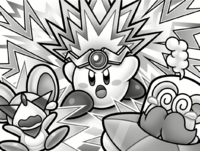 In the Kirby novel series, the Spark ability appears in Kirby Meets the Squeak Squad!, where Kirby obtains it from Sparky. With this Copy Ability, Kirby can generate an electrical barrier around him that can numb anyone that gets hit by it.

In Kirby Meets the Squeak Squad!, the Squeaks sneak into Castle Dedede in the middle of the night, and steal the egg that Kirby is tasked with protecting. Kirby chases after them outside, and Daroach commands Spinni and Doc to fight Kirby while he escapes with the egg. Sparky comes in to complain about all the noise, and the group notices that they are right in front of his house. Kirby is delighted to see Sparky, and inhales him to get the Spark ability. Kirby then uses this to shock Spinni and Doc, instantly defeating them. Spinni is knocked out, and Doc's machine malfunctions and flies away. With those two out of the way, Kirby chases after Daroach. When Kirby catches up, he quickly shocks Daroach and takes back the egg. When Kirby makes his way back to the castle, he drops his Spark ability to free Sparky, who is angry at Kirby, and returns to his house.