This article is about the monster, and should not be confused with the episode named after it.

This article is about Masher 2.0, and should not be confused with its previous entity Masher.

Masher 2.0 is a colossal robotic Monster which appears in Kirby: Right Back at Ya! in the episode of the same name. It holds a strong grudge against Knuckle Joe, who ultimately destroyed its past entity Masher. This brings them together in battle. After Knuckle Joe is forced to retreat, Masher 2.0 tracks him to Dream Land. Its stay is short-lived however, as it is demolished by the combined forces of Knuckle Joe and his closest allies from Dream Land.

Masher 2.0 is a giant mechanical menace built with highly upgraded weapons and defenses from that of its past form. It wields a massive flail that it is able to jerk back and forth quite easily due to its extreme strength and size. Its aim with the flail is also very precise, coming close enough to graze Knuckle Joe's cheek at one point. In addition to this, Masher 2.0 is further equipped with a beam of mass destruction, though it only uses this when stakes are high. Masher 2.0's armor also seems to be impenetrable to average weapons and blows.

Masher 2.0's body build and qualities are quite similar to that of Masher's. However, a few noticeable qualities separate it from Masher. It possesses two large retractable wings that attach to a jet-pack, which allows it to take flight. Masher 2.0 also sports a cross-design with a red gem located in the center of its main build, which is used to fire its aforementioned beam. 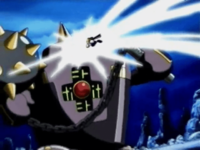 Knuckle Joe does battle with his adversary.

Masher 2.0 makes its only appearance in the episode of the same name where it is first seen in battle with Knuckle Joe alongside several other Monsters. Knuckle Joe fails to fend off Masher 2.0 and retreats from the battle. Masher 2.0 then pursues him to Dream Land where Sword Knight and Blade Knight attempt to intervene. However, Masher 2.0 easily knocks the knights out of the topic completely. Masher 2.0 is eventually challenged by Knuckle Joe as he attempts to defeat it. Meta Knight, Tuff, Fololo & Falala show up soon after in the Royal Racecar and give Knuckle Joe a strength magnifying device. Kirby distracts Masher 2.0 on the Warp Star as Knuckle Joe prepares the device. Masher 2.0 finally loses patience with Kirby and rises into the sky and releases its strongest offensive. All hope is lost until Knuckle Joe inserts his medallion into the device and uses its power to destroy Masher 2.0 for good.