Squeakers are enemies from Kirby: Squeak Squad that are part of the Squeaks. Squeakers are the lowest ranked henchmen of the Squeaks, but there are many of them. They resemble small mice, but do not have legs, instead opting to hop around like blobs. Squeakers come in multiple colors, including yellow, green, blue, and red; with each color acting differently.

In Kirby: Squeak Squad, Squeakers appear alongside a higher-ranking member of the Squeaks when Kirby collects a large treasure chest. They replace all original enemies in the room, and try to stop Kirby so the higher-ranking squeak can catch up to him.

A Squeaker's color determines its abilities. Yellow ones hop towards Kirby, green ones throw bombs, and blue ones throw giant bombs with bigger explosions. If a Squeaker hits Kirby, it will cause him to drop a Treasure Chest if he has one. This does not apply to hits from their bombs. Any Squeaker will drop one food upon defeat. Swallowing a Squeaker provides no Copy Ability (its bombs do not provide the Bomb ability either). Ghost Kirby's abiltiy to possess enemies does not work on Squeakers.

When a higher-ranking squeak gets Kirby's big treasure chest, they will run into a small lair. Kirby can enter the lair to face off against them along with several Squeakers, as a mid-boss fight. Kirby can also go in the lair when he has the large chest to face against just the Squeakers, but there is no reward for doing so.

Red Squeakers also appear, but only in Story Mode cutscenes and the sub-game Smash Ride. However, the red Squeaker appears as an unused enemy in a debug room, where it acts as a variant of the green Squeaker except it can double jump.[1]

In Kirby Mass Attack, Squeakers appear at Daroach's Airship, hopping across the bottom screen. The yellow, green, and blue varieties appear. Daroach mentions that they are the ones who found out where the medals are, but they are too timid to reach them.

In Kirby: Triple Deluxe, a green Squeaker appears as a collectible keychain. It is mistakenly called "Squeakers", while only one Squeaker is depicted.

In this game, a yellow Squeaker appears as an icon in the Music Room that represents the one and only Kirby: Squeak Squad music track: The Legendary Halberd.

A sticker of a blue Squeaker appears in Kirby: Planet Robobot. The sticker shows it holding a bomb.

In Kirby Star Allies, Squeakers appear as a hidden part of Daroach's moveset. If Daroach attempts to re-summon Spinni before he disappears, a Squeaker will be called instead. Squeakers hop forward and deal minor damage to foes on contact. It is randomly chosen if a yellow, green, or blue one will appear, although they do not function differently in this game. Squeakers also appear in the Celebration Picture: "The Great Labyrinth Battle", where all types are featured, even a red one.

In Kirby's Dream Buffet, a green Squeaker with a bomb is portrayed on a Character Treat, using artwork from Kirby: Squeak Squad. 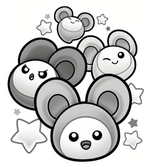 The Squeakers, as seen in Kirby Meets the Squeak Squad!

In the Kirby novel series, the Squeakers show up in Kirby Meets the Squeak Squad!. They are the combatants of the Squeaks, and serve as Daroach's lower-ranking henchmen. They only talk by squeaking, but Daroach can fully understand them.