Propeller, originally known as Propeller Bomb, is an enemy debuting in Kirby's Dream Land 2. It is a drop-shaped creature with two eyes, a mouth and a propeller attached to the top of its head. Depending on the game, different specimens of Propellers may possess noticeably different colors and facial expressions, and have different behaviors. Most of the time, Propellers are ability-neutral, but they provide Ice in Kirby 64: The Crystal Shards.

Kirby and Rick approaching a neutral Propeller Bomb in Kirby's Dream Land 2. Since Rick is with Kirby, it will become angry if approached much closer.

Propeller Bombs make their first appearance in Kirby's Dream Land 2. Here, they are green in color and found primarily in the later levels of the game. Unlike in later games, they only possess a single propeller blade. Propeller Bombs start out with their eyes closed, slowly hovering up and down in the air in a similar manner as a Scarfy. If Kirby approaches them, however, they become attentive and react differently depending on whether or not he is with an Animal Friend.

If Kirby is alone, the Propeller Bomb stops in midair and smiles upon seeing him, making no attempt at attacking. In this state, it can be defeated with any attack or inhaled, but does not yield a Copy Ability when swallowed. If Kirby is with a friend, however, the Propeller Bomb assumes a malicious expression and begins to chase the pink hero, flashing and flying through obstacles as it does. In this form, the enemy cannot be inhaled, but every other attack successfully performed against it causes it to pause for a second. Twelve hits cause it to explode, harming Kirby or his friend if they are caught in the blast. If it touches the Animal Friend, the friend flees immediately whereas the foe returns to its harmless state; avoiding it for a certain amount of time, however, causes it to fly away to the left or the right of the screen and disappear.

In any state, Propeller Bombs are worth 1500 points when destroyed, and 750 if Kirby inhales them.

Propeller Bomb can be found in the following levels and stages:

Propeller appears as a common enemy in this game, worth 600 points when defeated. It drops the Ability Changer.

Sprites of all Propeller types in Kirby's Dream Land 3. 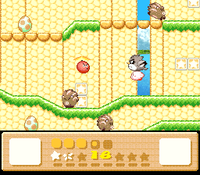 Two Propeller eggs can be seen on the left side in this image from Kirby's Dream Land 3. They will quickly hatch into Propellers when approached.

In Kirby's Dream Land 3, Propellers return, albeit with a different behavior and in much greater quantities, first appearing in the fifth stage of Grass Land. Instead of being found in the air, Propellers hatch from large eggs with brown spots when Kirby approaches them. Each freshly hatched Propeller assumes a random color and facial expression, out of a total of five. Once freed from its shell, the opponent begins to follow Kirby; however, unlike in the previous game, it cannot move through solid walls.

Although normally moving slowly, it speeds up greatly if Kirby is with an Animal Friend that matches its own color; the yellow (very happy) Propeller speeds up in the presence of Rick, the blue (sleepy) one in the presence of Kine, the brown (happy) variety is affected by Nago, the pink (surprised) one chases ChuChu and the black (malicious) Propeller follows Coo. Pitch is the only Animal Friend that none of the Propellers react to. If the friend is left behind, the foe will continue to orbit it instead of following Kirby.

Regardless of color or expression, every Propeller is vulnerable to any attack and can be inhaled, but yields no ability when swallowed. If Kirby avoids the adversary long enough, it flies skywards, moving through obstacles until leaving the screen at the top.

In Kirby's Dream Land 3, Propeller can be found in the following levels and stages: 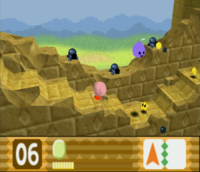 Kirby passing by a Propeller in Kirby 64: The Crystal Shards.

Propellers once again make an appearance in Kirby 64: The Crystal Shards for the Nintendo 64. In this game, they are purple and grant the Ice ability when inhaled and swallowed, making this the only appearance of Propeller where they provide any ability at all. Propeller also appears on Enemy Info Card #21.

Propeller can be found in the following levels and stages:

After a long absence, Propeller returns in Kirby: Planet Robobot, bearing a gray metallic look to it. It chases Kirby and explodes on contact. There is also a bigger variant which has much greater Health. It provides no abilities if swallowed.

In Kirby: Planet Robobot Propeller can be found in the following levels and stages:

Screenshots of Propeller in its docile (left) and angry (right) state from Kirby Star Allies.

Propellers appear in Kirby Star Allies, bearing a bluish hue and face similar to their Kirby 64: The Crystal Shards appearance, and generally harass Kirby and his friends by flying toward them. Once again, they provide no Copy Ability if swallowed.

In Kirby Star Allies Propeller can be found in the following levels and stages: