Bounder[1] is a relatively uncommon enemy which first appeared in Kirby's Adventure and most notably reappeared in Kirby Super Star. Its method of attacking is by grappling on to walls and throwing stars at Kirby.

Bounder's first appearance is in a black jumpsuit and its face has only two black eyes. In Kirby Super Star, it is now pale white instead of tan and it has a backpack, a blue suit, and red shoes; its eyes are now blue and it has a tuft of hair on it.

Bounder is commonly seen climbing up and down walls slowly, stopping for a moment in order to attack Kirby by throwing a star at him in an arc. Bounder can also be seen walking along the ground, though this is more often an occurrence in Kirby Super Star than anywhere else. 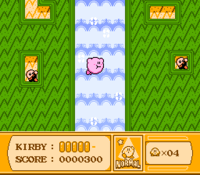 Some Bounders trapped in side pockets in Kirby's Adventure

Bounder made its debut appearance in this title. Unlike most of the other enemies in this game, Bounder does not appear in the remake, being replaced in Kirby: Nightmare in Dream Land by Gip wherever Bounder was originally found.

Bounder can be found in the following levels and stages:

Bounder appears as a bumper on the uppermost standard floor in Wispy-Woods Land, and can be seen crawling up and down the walls on each side. Bounder cannot be defeated in this game, but is worth 480 points when bumped into.

Bounder appears as a common enemy in this game, though it is considerably tougher than usual, requiring three hits to defeat. Bounder is worth 600 points on defeat and drops the Crash item.

Bounder appears in the Pinball mini-game, where it climbs up and down on one of the walls and halts Kirby's movement if hit, which adds 30 points to the score. It does not attack by throwing stars at Kirby but simply serves as one of the targets. 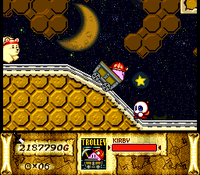 Kirby about to run over a Bounder in The Great Cave Offensive, in Kirby Super Star

Bounder makes its fifth appearance in the series here, though it is not present in very many locations. Much like before, it is also replaced by Gip in the remake of Kirby Super Star Ultra, with one notable exception mentioned in the next section.

Bounder can be found in the following places in Kirby Super Star:

Despite being replaced by Gip everywhere else, Bounder can still be seen in the background of the Sub-Game Megaton Punch. This cameo appearance can be considered Bounder's most recent appearance in any official capacity in the series.