The Lor Starcutter (sometimes shortened to Lor) is a technologically advanced flying ship which serves as a location, as well as a boss, in Kirby's Return to Dream Land. It is piloted by Magolor, who claims to have found it abandoned in a volcano on Halcandra. In the opening cutscene for the game, the Lor Starcutter crashes on Popstar, causing it to lose the oars, the left wing, the right wing, the mast, the emblem, and all 120 Energy Spheres. In order for it to fly again, Kirby and his friends must collect all of the missing parts. Once the Lor Starcutter has all parts restored, the Lor Starcutter is able to travel through dimensions to reach Halcandra, where it was originally salvaged.

The Lor Starcutter serves as a safe area Kirby can visit in-between his journeys in the game. Entering the Lor Starcutter leads to main room with Magolor, and the main console of the ship. The Copy Rooms are located to the left in the ship, the Challenge Stages to the right, and the Sub-Games Ninja Dojo and Scope Shot can be accessed by either going to the left or right hallway and going down a ladder. However, all of those need a certain number of Energy Spheres to access, and access to any of the rooms requires that Kirby find the Oars (complete Level 1: Cookie Country).

The following is spoken word for word by Magolor once Kirby has collected all 120 Energy Spheres:

It can be seen that the Lor Starcutter has a mind of its own when it rescues Kirby and company after Magolor is defeated. In Extra Mode, Magolor EX's Special Page states that he stole both the Lor and the Master Crown from their "sacred resting places on Halcandra". This aligns with his claim that he excavated the ship from Landia's volcano, and suggests a link between the two artifacts. Other dialogue from Magolor in Extra Mode strongly implies that the same ancients who built the Lor also built Nova from Kirby Super Star and the Star Rod from Kirby's Adventure. 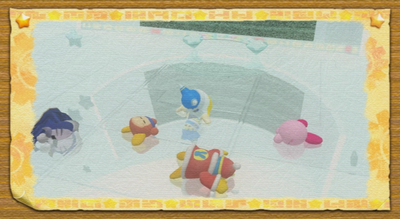 The main deck of the Lor, with its crew having been knocked about by Landia.

The numbers in parentheses denote number of Energy Spheres required to unlock the given door.

Near the end of the game, in Another Dimension, Kirby and his friends have to face off against the Lor whilst riding the dragon Landia. This boss fight is formally called Lor & Magolor.

The following lists all of the Lor's attacks in the Main Mode of Kirby's Return to Dream Land. Attacks in italics are used in the second phase of the fight only. All attack names are conjectural, unless otherwise stated.

In Extra Mode, the Lor's attack patterns are faster and cover more space, and a few new moves are added:

"The Lor Starcutter is a ship that sails across the universe. The ship's parts, scattered all across Dream Land following its crash landing, were all collected with help of Kirby and the gang. Some of the parts, like the emblem, mast, oars and wings, serve more than just ship parts. You'll find out later."

The Lor has made several cameo appearances in later Kirby games.

The Lor makes a brief cameo in Kirby's Dream Collection Special Edition. The interior is seen in the introductory cutscene for the New Challenge Stages Sub-Game when Magolor introduces himself, and it is seen flying in the background in the credits sequence, where Magolor returns to it after flying behind Kirby for a while.

The Lor is depicted in one of Kirby's Stone ability transformations in Kirby: Triple Deluxe, Kirby: Planet Robobot and Kirby Star Allies (as a silver sculpture in all three games).

In this game, the Lor Starcutter appears as an icon in the Music Room that represents the Kirby's Return to Dream Land music tracks.

In Kirby: Planet Robobot, the Lor sometimes appears inside the dimension rift laser of Galacta Knight Returns. Aditionally, an Sticker of an emblem of the Lor is obtainable in this game.

In Kirby Star Allies, the Lor sometimes appears in the level map of Far-Flung Starlight Heroes. In Update 4.0.0, a new Friend Ability called Magoloran Launch is used by Magolor as a Dream Friend, where allies can jump on the ship before it charges forward to attack.

The Lor Starcutter also cameos in the ending picture of Guest Star ???? Star Allies Go! if the player completes the mode with either Magolor, Taranza, or Susie.

In Kirby's Dream Buffet, the Lor Starcutter appears on a Character Treat, using its artwork from Kirby's Return to Dream Land.