This article is about the Sub-Game that has appeared in many games since Kirby Super Star. For rooms found in Kirby's Adventure and Kirby: Nightmare in Dream Land, see Arena (Kirby's Adventure).

The Arena is a Sub-Game debuting in Kirby Super Star, where the requirement is to the defeat the Main Game bosses and mid-bosses encountered in the title it appears in, with a single life, with limited health benefits. It is similar to Boss Endurance modes, but is generally given more importance, and is always required for 100% completion of the game.

In later titles, completing this mode would unlock The True Arena, which is a similar concept, but instead pits Kirby against all the Extra Mode bosses. 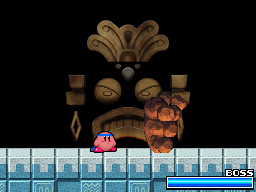 In Kirby Super Star and Kirby Super Star Ultra, the objective of the Arena is to defeat all the bosses from Spring Breeze, Dyna Blade, The Great Cave Offensive, Revenge of Meta Knight, and Milky Way Wishes. To make this task easier, Kirby is given five Maxim Tomatoes and five regular tomatoes to replenish his health, but he can only do so between boss battles. He is also given his pick of every normal ability in the game at the beginning, and may choose between two Copy Essences in between fights. Beating The Arena once is necessary to unlock the Sound Test in the original and The True Arena in Kirby Super Star Ultra.

The following is a list of the bosses encountered. The bosses are fought in a random order, with the exception of Marx, who is always the last boss fought.

Screenshot of introduction screen from Kirby's Return to Dream Land.

In Kirby's Return to Dream Land, The Arena is unlocked after completing the main Story Mode. Like the previous Arena, all of the bosses are encountered in a random order, except the Lor Starcutter, Magolor, and Magolor's 2nd form are fought last in that order. Completing this mode the first time allows P1 to be King Dedede, Meta Knight or Bandana Waddle Dee in replays of The Arena. The Arena in Kirby: Triple Deluxe is largely the same as the previous two. This time however, treasure chests will appear sometimes between battles, containing keychains. Players can also receive one Maxim Tomato inside an Assist Star that can be used mid-battle. The first seven bosses are fought randomly, while the last three fights are in a set order, like in Kirby's Return to Dream Land. 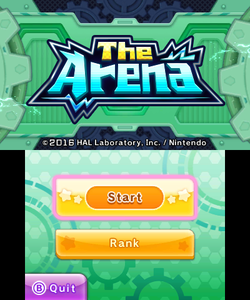 Unlike in previous installments, all the bosses and mid-bosses are fought in a set order. Rather than having a limited amount of healing items, an Assist Star is given after each round, with the contents being a Maxim Tomato after Clanky Woods, Mecha Knight, and President Haltmann, and a cherry after every other round.

The following bosses are fought in The Arena in this order:

This mode isn't actually called "The Arena" in the Japanese and Korean versions of the game - instead, it is named かちぬきボスバトル (Boss Battle Tournament) and 보스와 정면승부 (Head-to-Head Boss Battles), respectively. "Boss Battle Tournament" is the Japanese name for Boss Endurance in Kirby: Nightmare in Dream Land, Kirby & The Amazing Mirror, and Kirby: Squeak Squad. "Head-to-Head Boss Battles", likewise, is used to refer to Boss Endurance in the Korean version of Kirby: Squeak Squad. By extension, the same changes apply to The True Arena.