Kabu is a reoccurring enemy in the Kirby series, having appeared in many games since its debut in Kirby's Dream Land. It resembles a sculpted stone head, similar to the faces of the moai, with a flat bottom and a rounded top (though sometimes being depicted as cubical), typically beige or brown in color. Its face consists of two holes in place of eyes, a sculpted wedge-like nose, and a perpetually open mouth.

Depending on the game, Kabu may attack in a large amount of ways, including jumping, sliding, flying, and even teleporting. Big Kabu, a larger counterpart of Kabu, can also spit out smaller Kabu. Kirby can inhale and swallow Kabu, but in turn, does not receive a Copy Ability.

Kabu debuted along with Kirby in Kirby's Dream Land. Here, it can be found in the Float Islands stage, in the caves. It can be found patrolling the walkways as well as nestled inside holes in the walls. It attacks by sliding into Kirby, and dropping down on him from above. It can also fade away, and reappear in different areas. In the Extra Game, it is replaced by Grumples.

Kirby spotting two Kabu on the other side of a wall in Kirby: Nightmare in Dream Land.

In Kirby's Adventure and Kirby: Nightmare in Dream Land, Kabu appears as an enemy again, with a similar attack pattern. It still has the ability to phase in and out of sight, though it does this less often than in its previous appearance.

In Kirby's Adventure and Kirby: Nightmare in Dream Land, Kabu can be found in the following levels and stages:

In Kirby's Pinball Land, Kabu (known here as Kaboo[1]) appears in the lowermost board of Wispy-Woods Land. Six of them are arranged around the board, with a Big Kaboo in the middle. The side Kaboo are worth 360 points each time they are bumped. When the side Kaboo are bumped, they retreat into the walls of the board, leaving a small nub that is worth 180 points when bumped. Once all six Kaboo have been bumped, the Big Kaboo disappears, leaving a Warp Star behind. 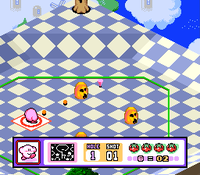 Kirby aiming at some Kabu in Kirby's Dream Course.

Kabu appears as one of the four basic grounded enemy types in Kirby's Dream Course, with the others being Broomhatter, Waddle Dee and Squishy. Kabu continuously spins, but do not move at all. When hit, it does not grant any special abilities.

In Kirby's Dream Course, Kabu can be found in the following courses:

In Kirby's Avalanche, Kabu is the sixth challenger Kirby must face. Despite its disadvantages, it acts cocky before the match begins.[2] This game marks the only time that Kabu has ever had dialogue, outside of its appearance in the anime series.

Kabu can be found in the following levels and stages:

In Kirby's Block Ball, Kabu appears as a pre-boss enemy in Stage 3 and is worth 5000 points when defeated. It then appears alongside a Big Kabu in the boss room of the same stage with a slightly different appearance. 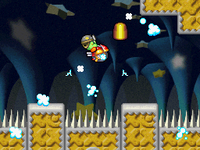 Kabu makes an appearance in Kirby Super Star and its remake; Kirby Super Star Ultra. In this game, Kabu may be seen warping in and out of visibility, and they may also occasionally launch like a rocket, leaving the area. Despite this odd behavior, they are as easy to defeat as any other common enemy, and do not have a lot of health. In Revenge of the King, Kabu is once again replaced by Grumples.

Kabu returns as a standard enemy in Kirby's Dream Land 3. Its abilities have been greatly toned down for this appearance, save for its tendency to spin around. Kabu is often seen being spat out by Dekabu.

In Kirby's Dream Land 3, Kabu can be found in the following levels and stages:

Kabu makes an appearance in Kirby Tilt 'n' Tumble. Unlike some of its other appearances, Kabu is relatively tame here, opting to only sit in place and act as a roadblock which harms Kirby on impact. Kabu can be defeated by popping up the Game Boy Color to flip the Kabu and turn it into a Star Piece.

In Kirby Tilt 'n' Tumble, Kabu can be found only in Lvl 2-2, ironically appearing less often than its bigger counterpart. 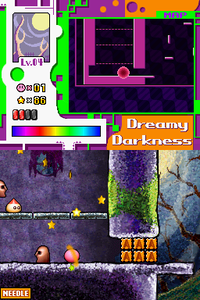 Kirby running into a Kabu in Kirby: Canvas Curse.

Kabu appears in Kirby: Canvas Curse, appearing in a few stages. Here, it spins along the ground, and has its signature ability to vanish and reappear elsewhere.

In Kirby: Canvas Curse, Kabu appears in the following locations:

Kabu are also conjured by Drawcia Sorceress in her boss fight, though these Kabu are a dark blue color.

In Kirby Mass Attack, Kabu appears in the Sub-Game Strato Patrol EOS as one of the opponents which the Kirbys can gun down. Four of them are split from a Big Kabu when it is defeated.

In Kirby's Return to Dream Land, Kabu returns as a common enemy with attack patterns similar to previous games. It most often appears in Raisin Ruins, fitting the ruined architecture of those stages.

In Kirby's Return to Dream Land, Kabu can be found in the following levels and stages:

Kabu appears as a common enemy in the New Challenge Stages in Kirby's Dream Collection Special Edition, unchanged in form and function from its appearance in Kirby's Return to Dream Land.

Kabu appears in Kirby: Triple Deluxe just like it did in Kirby's Return to Dream Land. It has the ability to move between the foreground and background by teleportation or by rolling back and forth between the planes.

In Kirby: Triple Deluxe, Kabu can be found in the following levels and stages:

Kabu returns in Kirby: Planet Robobot unmechanized and the same as in Kirby: Triple Deluxe.

In Kirby: Planet Robobot Kabu can be found in the following levels and stages:

Kabu makes an appearance as a common enemy in Kirby's Blowout Blast, spinning around various patrol paths before being bested by Kirby, worth 100 base points when defeated.

In Kirby Battle Royale, Kabu does not appear as an enemy, instead appearing in the audience for Apple Scramble, Robo Bonkers, and Slam Hockey.

Kabu returns in Kirby Star Allies with the same general look and behavior as it had in previous titles.

In Kirby Star Allies, Kabu can be found in the following levels and stages:

Kabu in Kirby and the Forgotten Land

Kabu returns as an enemy in Kirby and the Forgotten Land. It can usually be seen spinning along a set path. When attacked, but not defeated, it will vanish and then reappear somewhere else, then pursue Kirby. Kabu can also be spat out by Big Kabu, and will continue in a straight line until it vanishes, similar to projectiles thrown by other enemies like Gabon or Mookie.

In Kirby and the Forgotten Land, Kabu can be found in the following stages:

Kabu returns as an enemy in Kirby's Dream Buffet, here styled to resemble a chocolate-covered pastry with sprinkles on top. It appears as an obstacle on race courses, and can also be seen carrying strawberries in the Minigame mode.

Kabu's appearance in Kirby: Right Back at Ya!.

In Kirby: Right Back at Ya!, Kabu is a giant immobile stone statue located within a canyon named after him and is a deity to the public. The citizens of Cappy Town often ask him for guidance during times of peril, and see him as a more legitimate protector than their king. Kabu shelters the Warp Star, and the Star Warriors, as that was his original purpose.