Wheel is a Copy Ability that allows Kirby to transform into a rubber wheel and travel at very high speeds, able to plow through any enemies in his way as well as pass unharmed through invincible enemies like Gordo and stage hazards like spikes. Later games also allow Wheel Kirby to race on the surface of water without falling through. When Wheel Kirby is transformed, however, he cannot help but move forward and can only make a single short jump to get over roadblocks and pits. Since Kirby Super Star, Wheel Kirby has donned a red baseball cap, worn backwards over his head. The general way to obtain the Wheel ability is by inhaling the Wheelie enemy, or its bigger mid-boss variant, Grand Wheelie.

The Wheel ability first appeared in Kirby's Adventure, which places it as one of Kirby's oldest Copy Abilities. Since then, it has shown up again an appreciable number of times, though its appearances in the main series are very patchy. A very similar, but not identical ability is Wheelie Rider, which is accessed in an entirely different way, and only appears in Kirby Super Star and Kirby Super Star Ultra. 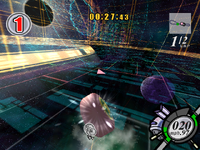 Wheel is among Kirby's simplest and yet more versatile abilities, and its speed is often unmatched, which makes it suitable for racing games like Kirby Air Ride.

Wheel is a classic transformation-style Copy Ability, as the player merely taps a button to make Kirby turn into and out of the Wheel form. When in Wheel form, Kirby acquires an entirely different set of movement options and physics. He will automatically race forward in whatever direction he is facing at very high speed, following the contours of the ground he rolls on. When going off a ledge, Wheel Kirby will fall rapidly, and will bounce back and automatically revert to normal when hitting a wall or other solid obstacle that he cannot plow through. To get over most roadblocks, Wheel Kirby has access to a single jump which has a shorter height than his regular one. To turn around, Kirby has to stop and make a quick hop before moving in the other direction, and sometimes needs to skid forward a bit first. While stopping to turn, Wheel Kirby is vulnerable to being hit by enemies, but is otherwise invulnerable to normal attacks and most hazards while moving. Wheel Kirby's main means of attack is by collision, and he can deal many hits to larger foes, Mid-Bosses, and bosses by running through them, but the damage output is not particularly high, so Wheel is not ideal for fighting in most cases.

Wheel Kirby can have varying attributes based on which game he is in, whether it arises from specific abilities given to him, or through emergent properties based on the game's physics. In Kirby's Dream Course and most games after Kirby: Nightmare in Dream Land, Wheel Kirby can ride on the surface of water, but will sink as soon as he stops for any reason, including to turn. In Kirby Air Ride, Wheel Kirby will automatically gain an appreciable amount of height when riding off of ramps, like the wheeled Air Ride Machines in the game. In Kirby: Squeak Squad, Wheel Kirby can gain elemental properties when rolling through the appropriate terrain after picking up the appropriate Ability Scroll. 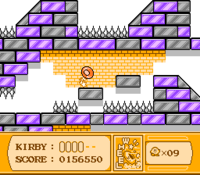 Wheel first appeared as an ability in Kirby's Adventure, and also appears in the remake, Kirby: Nightmare in Dream Land. A handful of areas in stages specifically cater to Wheel Kirby's movement options, with some intending use of the ability in order to access optional side areas and a Big Switch at one point. Wheel is provided by Wheelie and Grand Wheelie, and a Museum for it exists in Orange Ocean.

The Wheel ability appears in Kirby's Dream Course. It is introduced in Course 2, and is also featured in the opening for the 2P Kracko Course. It is obtained from Wheelie and can sometimes be obtained from Transformer. When used, Kirby transforms into a wheel and moves at very high speed until he falls off the map, hits a wall, or hits a bumper, then he launches a little vertically before coming to a complete halt. While in the air, Kirby can activate a different ability if he has one, which is an intended strategy for part of Course 8 - Hole 8. Wheel can also be used to cross ponds more efficiently, since Kirby rides along the surface of the water without falling through. When rolling into the opponent in the 2P game using this ability, he gets flattened. 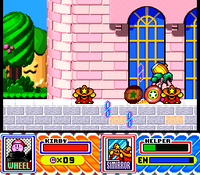 The Wheel ability returns in Kirby Super Star and its remake, Kirby Super Star Ultra. Like most of the other Copy Abilities, Wheel's moveset is expanded and improved in this game. Kirby is also given the choice to create a Wheelie as a Helper from the ability. Aside from the regular Wheel ability, Kirby Super Star introduces a new concept, known as the Wheelie Rider. When Kirby has a Wheelie Helper with him, he can jump onto his Helper and ride him, which accesses more moves for the Wheel ability, as well as traveling much faster than Wheel by itself. It also lets Kirby jump while dashing and Infinity Jump, while the standalone ability does not.

The Wheel ability appears in Kirby Air Ride, and can be obtained from Wheelies on the race courses, as well as from Copy Panels in City Trial and the Copy Chance Wheel. When Kirby obtains this ability, he transforms into a wheel, temporarily eschewing his Air Ride Machine. Wheel Kirby controls similarly to the Wheelie Bike, though he is considerably faster and more nimble. After a short period of time, this ability is lost, and Kirby returns to normal.

Starting with Kirby & The Amazing Mirror, Wheel can be used to ride on the surface of water.

Wheel appears in Kirby & The Amazing Mirror, and can be obtained from Wheelie or yellow-colored rolling Golems. It looks and functions almost identically to the way it did in Kirby: Nightmare in Dream Land, though crucially it has gained the ability to roll on the surface of water; a trait that would remain going forward.

In Kirby: Canvas Curse, the Wheel ability functions much like in mainline titles, causing Kirby to speed up and plow through enemies and obstacles, as well as jumping off of Rainbow Lines. It is one of four copy abilities that have their own Course A and Course B Rainbow Run courses.

The Wheel ability returns in Kirby: Squeak Squad, and it can pick up fiery, icy, or electric properties if Kirby rides through the appropriate hazardous terrain, though this requires the Wheel Ability Scroll to work.

Wheel returns after a fairly long absence in Kirby: Triple Deluxe. It is once again obtained from Wheelie and Grand Wheelie and allows Kirby to quickly dash through enemies, and even skid across the top of water. In addition, Kirby gains the ability to charge up a boost while in Wheel form, going very quickly for a short time. Since this game, Wheel's ability hat has been modified to become more stylized, now having an elaborate star-shaped racing emblem on the front of the hat.

Wheel returns again as an ability in Kirby: Planet Robobot, unchanged from its appearance in Kirby: Triple Deluxe. It is also compatible with the Robobot Armor, with this mode being required for certain stages of the game. 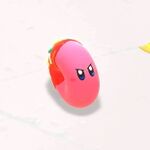 Wheel returns as an ability in Kirby's Dream Buffet, but this time with a food motif. When Kirby picks up a Wheel Donut from a Food Box, he takes on the shape of the donut and can roll quickly along race courses, as well as knock aside any opponents in the way. If the player holds R as Kirby turns while using the ability, he begins to drift; if held for long enough, Kirby performs a Turbo Drift, gaining extra speed temporarily. This ability is only available for a limited duration, and can be used in all game modes. Kirby will not roll off edges while using this ability.

The Wheel ability makes two appearances in the anime series Kirby: Right Back at Ya!, in The Kirby Derby - Part II and Born to Be Mild - Part II. Here, it operates largely the same as it does in the games, though Kirby's Wheel form is much larger here. Wheel Kirby is depicted as being extremely fast and agile, able to make circuits around the entirety of Dream Land in a matter of seconds. The draft created behind Wheel Kirby is also such that other vehicles can follow behind and gain the same level of speed.

Notably, when in Wheel form, Kirby resembles a red tire with a green and yellow interior. This contrasts with most of the games, which still depict his tire as pink.

In the Kirby novel series, the Wheel ability appears in Kirby and the Dangerous Gourmet Mansion?! and Kirby Meets the Squeak Squad!, where Kirby obtains it from Wheelie. This Copy Ability functions just like in the games, where Kirby turns into a wheel and rolls forward at high speeds. Kirby usually uses this ability to pull heavy vehicles, and is notably strong enough to pull an entire airship that is tied to him with a rope. Kirby can also use Wheel to ram into anything meant to stop him, and has been shown to be strong enough to destroy a large cannon by doing this.

In Kirby and the Dangerous Gourmet Mansion?!, when Kirby, King Dedede, and Meta Knight venture out to catch the thieves that kidnapped Mrs. Parfaitski, they catch Wheelie. Dedede forces Wheelie to tell them where Mrs. Parfaitski was taken. The three head to Meta Knight's airship - which they took to Parfaitski's mansion - only to find that the engine had been sabotaged, which the three believe that Wheelie was responsible for. Kirby gets an idea, and inhales Wheelie to gain the Wheel ability. He then gets a rope and ties himself to the airship. Kirby uses Wheel to pull along the sabotaged airship with King Dedede and Meta Knight in it. When the group reaches a small ravine, Kirby stops and lets Meta Knight's airship land. The group is then attacked by Sir Kibble. Kirby drops the Wheel ability, releasing Wheelie, and then proceeds to inhale Sir Kibble.

In Kirby Meets the Squeak Squad!, when Kirby, King Dedede, and Waddle Dee return to the ancient temple to bring back the egg they took care of, Wheelie lets Kirby copy the Wheel ability from him. Wheel Kirby pulls a cart with Dedede, Waddle Dee, and the egg in it so they can get back to the temple quickly. The Squeaks try to stop them with a cannon that shoots Air Bullets, invented by Doc. The group notices this, and Kirby charges into the cannon, smashing it to atoms. When they eventually reach the temple, Kirby drops his Wheel ability, allowing Wheelie to make his way back to Castle Dedede.