Hi-Jump is an infrequent Copy Ability that debuted in Kirby's Adventure. Kirby can get it by swallowing a Starman, and while using the ability, he gains a winged circlet and superhero-like cape. Using this ability, Kirby can jump very high, damaging foes he collides with and gaining invincibility during the jump. Later games would expand Hi-Jump's movement capabilities, allowing Kirby to leap even while in the air, or even rocket downward with a similarly devastating dive, with steering controls for both directions that are tricky to master, but allow for pin-point precision. 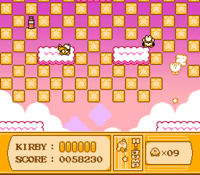 Kirby using Hi-Jump to traverse a field of Star Blocks in Kirby's Adventure.

The Hi-Jump ability debuted in Kirby's Adventure and also appears in its remake, Kirby: Nightmare in Dream Land. While having no costume in the original Kirby's Adventure, Hi-Jump Kirby gets his signature cape in its remake. It is only provided by Starman, and there is a Museum for it in Butter Building.

In Kirby's Adventure, Hi-Jump deals 8 damage.[1] In Kirby: Nightmare in Dream Land, Hi-Jump deals 10 damage (equal to Star Bullet).[2] In both games, Hi-Jump can be canceled in midair by pressing B, which, if used skillfully, gives it one of the highest DPS of all abilities for boss battle.

In Kirby's Dream Course, Kirby can obtain the Hi-Jump ability by colliding with an enemy Starman. When acquiring this ability, Kirby can make a large high leap in a given direction, defeating enemies he comes into contact with and clearing tall walls and gaps. This jump can also be used in mid-air, but can only be done once per shot.

In addition, this ability can be upgraded by obtaining its Ability Scroll which can be found in Cushy Cloud Stage 4. While not increasing its damage output, Hi-Jump Scroll increases its attack hitbox and allows this ability to break Metal Blocks.

Kirby using Hi-Jump to crash through enemies in Kirby's Return to Dream Land.

One of the Challenge Stages is devoted to the Hi-Jump ability.

In Kirby Star Allies, Hi-Jump Kirby makes a cameo on "The Great Labyrinth Battle" Celebration Picture, occupying the right side of the picture. 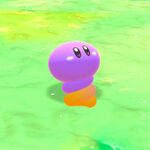 Hi-Jump appears as one of the Copy Food abilities in Kirby's Dream Buffet, obtained by collecting a Hi-Jump Gummy from a Food Box. Here, instead of giving Kirby his familiar cape, it transforms him into a coiled gummy spring. He can then perform a single massive leap from his position to land further down on the race track. By holding the R button down upon activation, the landing location can be adjusted. When he lands, any racers near the landing site will be knocked back.