HR-D3, also known as Dedede Robo[Japanese title], is an extra-large robot boss which appears in Kirby Mass Attack's Kirby Quest mode and Kirby's Return to Dream Land's Extra Mode. It was originally intended to appear in the canceled title, Kirby for Nintendo GameCube.

HR-D3 is a giant robot that greatly resembles King Dedede. It is balanced on a piston, so it primarily jumps around as its main form of movement. It has one robotic hand, with the other hand being a power drill. It has lasers within its "eyes," a pilot's seat within its "head," and a huge beam cannon within its "mouth." In its original appearance, it is painted in King Dedede's color scheme and has his signature V-sign insignia on its chest; in Kirby's Return to Dream Land, it has the red-and-silver color scheme of Metal General EX, with an insignia resembling the general on its chest.

As shown in preview material for Kirby for Nintendo GameCube, King Dedede was originally piloting the robot, and it was being powered by Kirby's stolen Warp Star. The Dedede Robo only shows direct ties to King Dedede in Kirby Quest, where it has his insignia and Dedede is shown collapsed after its defeat. In Kirby's Return to Dream Land, it is rechristened HR-D3; Metal General EX can be seen piloting the robot, though it does not appear to have an external power source as it did originally. The "D3" part of HR-D3 name is a reference to the pronunciation of "Dedede", while the "HR" part draws a parallel with HR-H from Kirby 64: The Crystal Shards. Like HR-D3, HR-H is a humongous, transforming robot that is not native to Popstar.

Dedede Robo appears in the Kirby Quest mode, as the last encounter in Chapter 2. It has 2,500 HP.

HR-D3 appears as its rebranded form in Extra Mode and can be fought again in The True Arena, and in the former it is fought directly after Metal General EX at the end of Egg Engines. If the fight with HR-D3 is lost, Metal General EX's fight is automatically skipped so the player can try again, though losing a life on the second stage of HR-D3's restarts at the first stage of the fight with the former. HR-D3's pause screen description calls it "an ancient war machine" that "drifted in from another dimension," which is likely a reference to Another Dimension, but could also reference its origins in the canceled GameCube game. 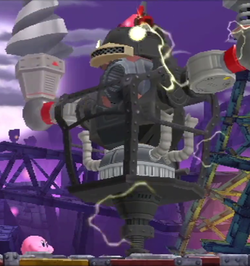 Well into phase 2 of the fight, HR-D3 has suffered from serious damage and its innards are exposed.

HR-D3 fights in two phases, with two separate health bars. The following are the attacks in the first phase:

In the second phase, a new health bar must be depleted, and HR-D3 attacks on the stage itself, taking up a great deal of space as it does so:

As HR-D3 takes damage, it loses pieces, eventually ending up as a barely functioning skeleton near the end of the fight. Defeating it destroys its essential components, and causes it to fall backwards and explode with Metal General EX inside.

For the first phase of the fight, Grand Doomer's battle theme is used. For the second phase, the music switches to "Four-Headed Guardian Angel: Landia".