President Haltmann (full name Max Profitt Haltmann) is a character in Kirby: Planet Robobot, serving as the game's primary antagonist. He is President of the Haltmann Works Company, even receiving the dignity of an anthem in his glory, and is responsible for the invasion of Planet Popstar and many worlds before it. He manages this invasion from the comfort of his executive suite on the Haltmann Works' flagship, the planet-sized Access Ark, powered by an ancient relic which he refers to as the Mother Computer. He is voiced by Mugihito.

Haltmann is fairly large and egg-shaped, with pale skin, and disembodied hands and feet. He sports solid cyan eyes, a prominent brow, and purple hair and moustache. He wears a very dark indigo suit with a maroon tie and pink collar. He also sports a small golden radio piece on the side of his head. His gloves and body are adorned with gold-encrusted rubies. Similar to Susie's Business Suit, he has a solid gold mech named the Executive Suit. When not in the suit, he moves about by means of his hovering golden chair, which suggests a generally sedentary lifestyle, as he is never seen walking or even standing up.

President Haltmann's likeness is first seen in Stage 1 of Access Ark, after Kirby has already boarded the mothership. He is later encountered directly at the end of that same level, in the Haltmann Works executive office. He dismisses Susie after Mecha Knight+ is defeated, and then proceeds to address Kirby directly. Haltmann then shows him Star Dream, explaining that they'd managed to reactivate it using the knowledge of lost ancient civilizations. He then mans a large mech made of pure gold, called the Executive Suit, and engages Kirby with it.

When he is defeated, he runs a tantrum, calling Kirby and his friends savages. In his rage, he turns to Star Dream and begins to activate it using a special helmet. As he boots it up, however, Susie steals the helmet from him, causing him to black out. As it turns out, Susie was aiming to betray Haltmann this entire time, and take Star Dream for herself. Star Dream itself then intervenes, knocking Susie out as well with a lightning bolt. Star Dream then uses Haltmann's body to declare that it will destroy all of history up to this point, in order to pave the way for 'infinite prosperity'.

At this point, it is explained, primarily through Pause Screen notes, that Haltmann's mind and soul have been intertwined with Star Dream's OS. It is this fusion that sends the computer on a berserk fury. When the machine is finally destroyed, along with Access Ark, Haltmann is destroyed with it.

President Haltmann is encountered at the end of the Access Ark stage, this time as Pres. Haltmann 2.0. After his defeat at the hands of Meta Knight, Star Dream appoints the victor as the new admin. Haltmann is not seen again after this point.

President Haltmann is encountered as a Boss in The Arena, and his 2.0 form in The True Arena. He is also seen again during the special performance video which is unlocked upon 100% completion of the game.

Haltmann's likeness can be collected as a sticker, which is awarded for collecting every Code Cube in the game.

The following lists all of President Haltmann's attacks in Kirby: Planet Robobot. Most of Haltmann's attack names listed are taken from the Japanese strategy guide, which mostly are related to office and business. 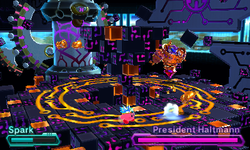 Haltmann prepares to launch his drones in Phase 1 of the battle.

In phase 1, Haltmann attacks in a fixed order on loop as follows: 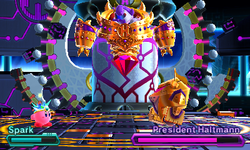 Haltmann summons a Yesman robot to deal with Kirby in Phase 2 of the battle.

When Haltmann has lost one-fifth of his Health, he lowers the central column in the battlefield, changing the arena into a straightforward one.

In phase 2, Haltmann attacks in a fixed order on loop as follows: 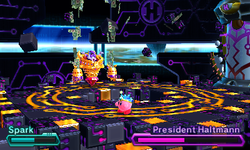 Haltmann has more cash than he knows what to do with...

When Haltmann is down to half health, he smashes a hole in the middle of the arena, making it a circular one again.

In phase 3, Haltmann begins with this attack:

After that, Haltmann attacks in a fixed order on loop as follows: 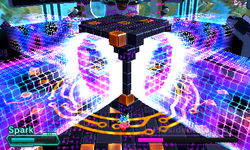 When Haltmann is down to one-fifth of his health, he "opens the office" (オープン ザ オフィス) by conjuring a large square platform to appear in the middle of the arena, and creating holes in it.

In phase 4, Haltmann always starts with these attacks:

After that, he then attacks in a fixed order on loop as follows:

Once Haltmann is defeated, he attempts to pilot his mech further, but it short-circuits and explodes on him, leaving him helpless in his chair, as singed Haltmann dollars rain down on him. 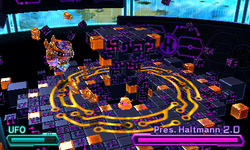 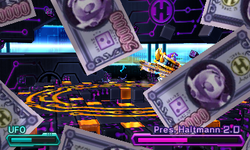 Paper bills partially obscure the screen as Pres. Haltmann 2.0 spins around the stage

In Meta Knightmare Returns and The True Arena Haltmann is fought as Pres. Haltmann 2.0, similar to most other bosses. Similar to Susie 2.0, his actual design stays the same and only his Executive Suit changes in appearance, with it having black and platinum accents in addition to the original gold.

The following lists all of Pres. Haltmann 2.0's attacks in Meta Knightmare Returns and The True Arena:

President Haltmann 2.0's attack orders across every phase in Meta Knightmare Returns and The True Arena are the exact same as those in the regular battle in Story Mode and The Arena.

The pause flavor text of Guest Star Susie Extermination By Blaster❤ reconfirms that President Haltmann and his company have been destroyed during the events of Kirby: Planet Robobot.[1] Thus, he is deceased as of Kirby Star Allies. However, his portrait still makes some cameo appearances in Kirby Star Allies:

In Kirby's Dream Buffet, a Character Treat depicting President Haltmann can be collected. The treat uses the same artwork as the sticker from Kirby: Planet Robobot.

President Haltmann is often associated with these musical themes: