This article is about the Copy Ability. For item in Kirby Air Ride, see Hammer (item).

Hammer is a Copy Ability which provides Kirby with a wooden mallet to wield against foes and obstacles. Its mechanics work similar to the Sword ability, though it is slower, yet more powerful. First appearing in Kirby's Adventure, it is one of Kirby's oldest copy abilities in the series. Oddly, while most Copy Abilities were given a hat in Kirby Super Star, Hammer Kirby's sprite remained unaltered, except for the hammer itself. This was changed in Kirby: Nightmare in Dream Land, which depicts Hammer Kirby with a white rope headband. In that same game, the hat would also appear coiled with alternating white and blue strands, and this version of the hat would become standard going forward.

Hammer is a somewhat rare ability: normally, it can only be obtained from a mid-boss, Bonkers. There are rare instances of it being obtained from other sources, however: Heavy Mole's golden missiles, Storo (from a hammer he drops) in Kirby: Squeak Squad, and other sources such as a Copy Essence can provide it. It is one of the few abilities that can be used underwater, and it is also one of the few abilities that can push stakes into the ground and destroy metal blocks.

Hammer also builds the base of the fighting style of King Dedede, Kirby's arch-rival and occasional nemesis. Several descriptions of the ability also imply that Kirby's hammer is from the king himself.

Hammer is among the original set of Copy Abilities which appeared in Kirby's Adventure, and since then has not changed much from its fundamental function and role. In its most basic form, the Hammer ability can be seen as a stronger but slower and lower-range form of the Sword ability, allowing Kirby to make an overhead swing or a spinning aerial (or underwater) swing to pound his enemies for massive damage. The hammer can also be used to break away metal blocks and pound stakes, which makes it useful to collect hidden items or access secret chambers. To use this ability effectively, Kirby needs to anticipate when his enemies might strike and hit them in the opportune moment, as any miscalculation will leave him wide open for counterattack. Masters of the Hammer ability can dish out serious damage in a very short amount of time, making Hammer a common pick for completing game modes like The Arena quickly.

Starting with Kirby Super Star, Hammer would gain a wider variety of moves, distinguishing it from Sword and other weapon-based abilities. Among these are the ground-covering "Hammer Swing", the boss-slaying fiery upper swing called "Hammer Flip", and the move of last resort: "Hammer Throw", which gives Kirby a strong ranged attack at the expense of the ability itself. Hammer's most common provider and helper representative is the mid-boss Bonkers, making Hammer one of the few abilities which is not typically provided by regular foes. 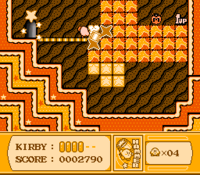 Kirby using Hammer to pound a stake in Kirby's Adventure.

Kirby's Adventure marks Hammer Kirby's first appearance, and the ability also returns in the game's remake, Kirby: Nightmare in Dream Land. Like its lighter counterpart, Sword, it comes with two different attacks: A heavy swing when used on the ground, and a somersault attack when used in mid-air or underwater. The icon for the Hammer ability depicts Kirby during a jump, with a big hammer raised into the air and a determined expression on his face. The icon was changed for Kirby: Nightmare in Dream Land, where it shows Kirby with his headband, holding and swinging a giant mallet with both hands.

Hammer reappears in Kirby Super Star and its remake Kirby Super Star Ultra. Like most Copy Abilities its move-set has changed and improved from its previous incarnation. Aside from regular attacks, the Hammer can now be charged and release a flame attack, which can even light fuses, and it can even be thrown at enemies, which, however, causes Kirby to lose the Hammer ability. Hammer Kirby can also summon Bonkers who then acts as a Helper.

The Hammer ability also plays a somewhat special role during Kirby's fight against Masked Dedede in Kirby Super Star Ultra. Before the fight begins, King Dedede offers Kirby a Hammer to battle, which is a spoof of Meta Knight's habit to give Kirby a Sword before the battle begins. Kirby can ditch the hammer after collecting it, though, and fight Masked Dedede the regular way. Hammer Kirby makes another appearance during the introduction cutscene of The True Arena.

The Hammer ability makes its next appearance in Kirby & The Amazing Mirror, where it is again one of the rarer Copy Abilities and can be obtained only from Bonkers, after Kirby has defeated him in a duel. Unlike in Kirby: Nightmare in Dream Land, most of Hammer's moveset from Kirby Super Star is intact, removing only Hammer Throw and Ultra-Giant Swing. Kirby can also use a hammer via the very versatile Smash ability, the only disadvantage being that this hammer cannot be used underwater.

Hammer makes another appearance in Kirby: Squeak Squad. Here, it can be dropped occasionally by Storo, in addition to Bonkers. Acquiring the Ability Scroll for Hammer grants an additional move, where Kirby can charge his hammer swing, making the hammer bigger before it comes down, dealing additional damage.

Grand Hammer is the Super Ability-equivalent to Hammer, found in Kirby's Return to Dream Land.

Hammer makes an appearance in Kirby's Return to Dream Land and its remake, Kirby's Return to Dream Land Deluxe, obtained primarily from Bonkers. Hammer Kirby features its typical hammer usage move set, including a hammer throw that will sacrifice Kirby's ability, as well as a few new moves such as the Hammer Twirl. In addition to the standard Hammer ability, in some stages, Kirby may obtain a Super Ability called the Grand Hammer, obtained from Super Bonkers, which can destroy and hit stumps that are particularly large. King Dedede in this game has a move-set almost identical to that of Hammer Kirby, though he can perform the Hammer Throw as many times as he wishes without losing the ability.

Hammer once again returns in Kirby: Triple Deluxe, only obtainable from Bonkers and Bonkers DX. However, Triple Hammer is removed from Hammer's moveset in this game and future titles. King Dedede once again uses a nearly identical move-set, excluding that some attacks are renamed and that he can use Hammer Throw for an infinite amount of times. Additionally, Hammer Kirby appears as a collectable Keychain, using his sprite from Kirby: Nightmare in Dream Land, Kirby and The Amazing Mirror and Kirby: Squeak Squad.

Hammer also appears in the sub-game Kirby Fighters as a selectable ability.

Hammer appears as one of the selectable Copy Abilities in this spin-off title.

Hammer returns as an ability in this game, though it is rather rare. In addition, there is a custom variant of Hammer that makes Kirby resemble King Dedede, unlockable by scanning Dedede's amiibo in the game.

Hammer is one of the abilities usable in this action-multiplayer title. Hammer Kirby is notable for his attack power compared to other abilities. His Hammer Flip also has two levels of charge - the second one being capable of KOing in one hit - though it takes some time to charge up.

There are three additional pieces of Headgear for the Hammer ability in this game. These are the "Dedede Hammer", the "Toy Hammer", and the "Grand Hammer Replica".

Kirby breaks his hammer by charging Hammer Flip too long.

Hammer returns in this title. While it is largely the same as it was in previous main series titles, the Hammer Flip has been changed somewhat. Kirby can now move and jump once while charging it, similar to the variant in the Smash ability, Super Smash Bros. for Nintendo 3DS / Wii U, and Hammer Lord's version. Additionally, the hammer can be charged to several levels before releasing for very high damage output. However, if Kirby charges for too long, the hammer's head will actually break. Even if this happens, Kirby can still swing the handle to deal a small amount of damage. Afterward, the hammer will repair itself.

Hammer can also be infused with the five elemental augments; Blizzard, Bluster, Sizzle, Splash, and Zap for additional effects. Due to this however, Kirby's hammer no longer catches on fire when using Hammer Flip by default.

Hammer returns in Kirby Fighters 2 as a selectable ability for Kirby. It is unlocked after attaining a Fighters Rank of 13. Its move-set is largely the same as before, though the Hammer Throw technique cannot be used.

Kirby using Hammer on a Rabiroo in Kirby and the Forgotten Land.

The Hammer ability returns in Kirby and the Forgotten Land. This is the first game to introduce a regular enemy that provides Hammer, Mookie. Like in previous games, Kirby can use the Hammer ability to pound down stakes to solve puzzles. Kirby also retains the Triple Hammer, Giant Swing and Hammer Flip as attacks. In addition, Hammer can also evolve into one of three additional forms, those being Toy Hammer, Wild Hammer, and Masked Hammer.

All attack names are taken from the Kirby and the Forgotten Land Perfect Support Guide. Applicable equivalent adapted English names from other games are listed in bold.

Kirby making use of the Hammer Flip technique in Super Smash Bros. Ultimate.

Hammer also appears in the Clash series of spin-off titles as Hammer Lord. Functionally, these two abilities are the same, though there are a few key differences. Hammer Lord is much slower on his feet than standard Hammer Kirby, and cannot hover very well. Additionally, Hammer Lord's Hammer Flip can be charged to three levels of power to inflict massive damage, which can only be topped by the Team Meteor.

The Hammer ability makes three appearances in the anime series Kirby: Right Back at Ya!, in the episodes Dedede's Pet Threat, Goin' Bonkers, and Shell-Shocked. It functions largely the same as it does in the games, though Kirby gains a solely white knotted headband. Kirby gains this ability by inhaling a hammer, whether it be from King Dedede or Bonkers. When Kirby gains this ability, he is typically able to dispatch his opponent(s) easily - which matches the power of the Hammer ability in the games - though it takes several concerted swings and then a Hammer Throw to crack the shell of the potent Maimaigon.

Notably, during Hammer Kirby's transformation sequence, he first cycles through several different weapons before finally landing on the hammer. These weapons include a serrated voulge, a trident with extra spikes, a battleaxe, a battle-rake, a demi-lune, and a quarterstaff.