Landia is a boss that debuted in Kirby's Return to Dream Land, residing in Halcandra, and serves as the boss of the Dangerous Dinner level. He appears as a four headed orange-red dragon, where the top head of the dragon carries the Master Crown, a legendary artifact of limitless power. However, this combined form appears to be an effect bestowed by the crown, as Landia normally appears as four separate much smaller dragons.

In the story of Kirby's Return to Dream Land, Magolor commands Kirby to go and defeat Landia, as Landia attacked the Lor Starcutter, Magolor's ship, as Magolor arrived at Halcandra, along with Kirby. Upon Landia's defeat by Kirby, it is revealed that Magolor and Landia had a past conflict, which ended with Magolor fleeing to Popstar, and only enlisted Kirby's help in repairing the Lor Starcutter to defeat Landia and help him obtain the Master Crown, which would give him the power to rule the universe. Landia, now consisting of four small dragons, then assists Kirby and accompanying friends, in chasing Magolor and the Lor Starcutter when Magolor enters Another Dimension to go and conquer Popstar. Once Magolor and his mutated second form are defeated, Landia, along with the now friendly Lor Starcutter, assists Kirby in returning to Dream Land. 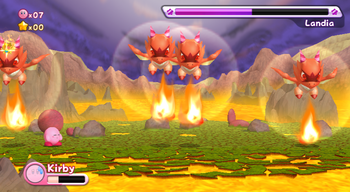 In the second phase, Landia splits into four dragons

Landia is faced as the boss of Dangerous Dinner. During the first phase of the fight, he fights as the whole dragon. During the second phase, he splits up and attacks as the four smaller dragons, and the dragon wearing the crown takes more damage than the other three. They may recombine into their four-headed form during the second phase for certain attacks.

The following lists all of Landia's attacks in the Main Mode of Kirby's Return to Dream Land. Attacks in italics are used in the second phase of the fight only.

In Extra Mode, Landia transforms into Landia EX when encountered. In this form, his color scheme is purple, and his attacks are generally faster and cover more ground.

Landia tosses Kirby onto his back, to team up and take down Magolor.

In the level Another Dimension, the stages encountered prior to the fight with Magolor are traversed riding Landia, in a side-scrolling shooter section. He is considered a Last Battle Ability, similar to the Starship from Kirby Super Star.

Landia is one of the paintings Paintra can draw in her boss battle (or Landia EX in her DX form). 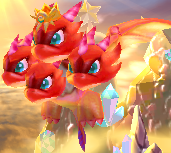 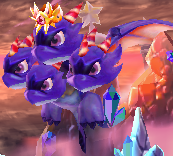 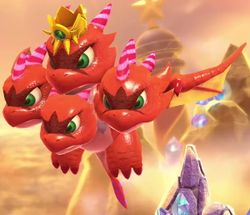 Landia reprises his role in Team Kirby Clash Deluxe and Super Kirby Clash--his attacks and role in the story undiminished from before. He has been made much tougher in all his iterations, in order to provide more of a challenge for Team Kirby.

Bosses from Another Dimension invade the Dream Kingdom after the credits roll for the first time in Team Kirby Clash Deluxe, one of them being Parallel Landia, a black-colored counterpart to Landia who is much more powerful and wears a black Master Crown.

The Landion blade and Landion Helm are the respective Rarity 9 (Rarity 11 in Super Kirby Clash) Weapon and Armor set for Sword Hero Kirby, sold at Magolor's Shoppe. Their designs are based on Landia the dragon himself.

Landia makes a small cameo in the "FIGHT FOR THE CROWN" and "The Shape of a Heart" Celebration Pictures. In the first one, he appears in bottom-left and bottom-right panels, while in the second, he occupies the left side.

In Super Smash Bros. Ultimate, Landia appears as an attack-type ★★ primary spirit with 3 support slots. His initial stats are 834 attack and 603 defense, but when leveled up to level 99, he has 3,372 attack and 2,442 defense. He can be obtained in five ways: summoning him using the spirits or cores of Nibbles and Fortitudo, battling him in World of Light, battling him via the Spirit Board, or purchasing him from the Shop, however the latter two methods require him to be obtained at least once before.