Fryclops is a bulbous Chinese chef monster who appears in the Kirby: Right Back at Ya! episode Hunger Struck, He is called in by King Dedede to feed his mutinous Waddle Dees and mollify them, then Fryclops uses their new loyalty to him to attack Kirby. Kirby retaliates by gaining the Cook Copy Ability and using it to feed the Waddle Dees in turn, pacifying them. Kirby then defeats Fryclops in direct combat.

Fryclops's name is a portmanteau of the words "fry" and "cyclops".

Fryclops is a large creature who is similar in shape and anatomy to King Dedede. His face consists of a large single eye with a wide mouth with one long tooth rising from the bottom, accented with a long thin mustache and spiral patterns on his cheeks. His outfit consists of a red robe which resembles a traditional Chinese chef's outfit with a white apron on top, along with a conical red and green cap with an orange pompom on top. He has yellow feet similar to those of King Dedede.

Fryclops is an eccentric and energetic chef who has the power to conjure large quantities of Chinese food to feed big crowds. He is also vindictive and cruel, with his only real goal being to destroy Kirby by turning him into stir fry. 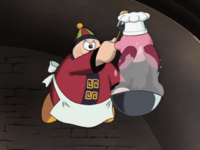 Fryclops attacks Kirby by dumping him into his sizzling wok.

Fryclops appears in the episode Hunger Struck, sent by Night Mare Enterprises in order to feed the Waddle Dees and stop them from overthrowing their stingy King. After gaining the Waddle Dees' loyalty, Fryclops orders them to attack Kirby for him, and they proceed to menace him. Later on, Kirby gains the Cook Copy Ability and uses it to feed the Waddle Dees himself to stop them attacking him. Kirby and Fryclops duel to see who can get the Waddle Dees' attention, but Kirby ultimately wins out by giving the Waddle Dees some healthy vegetarian cuisine. Having lost his army, Fryclops then attacks Kirby directly, attempting to cook him alive in his wok. Kirby manages to fight back and defeats Fryclops by turning him into deep-dried tempura, resulting in him exploding.