Slice n' Splice is a monster which appears in the episode The Fofa Factor from Kirby: Right Back at Ya!, where it serves as the main antagonist. It holds two staves which it uses to cut its foes and mix their parts. It is the reason why Fofa was cut into Fololo & Falala. Slice n' Splice and its staves are destroyed when Cutter Kirby severs the robot's left arm off with his blade and then cuts the robot into two with a devastating Final Cutter.

Slice n' Splice is a large robot which consists of a bulky rectangular body with two segmented arms and four similar legs. The robot's body is pale green in color and has two massive red eyes on the front. In its hands, Slice n' Splice holds two staves, with one having a head resembling the Sun and another resembling the Moon. The Moon staff is used to slice things apart, and the Sun staff is used to put them back together again.

Using these staves, Slice n' Splice is able to either swap the body parts of different characters, creating odd mis-matches, or split a single character into two smaller male and female versions of themselves. This latter power was how Fololo & Falala were created in the anime series. This process also appears to blank the memory of the affected character, though for some reason, this does not affect King Dedede when he is split for a moment. Its Moon staff grants Kirby the Cutter ability when he swallows it.

Role in The Fofa Factor[edit] 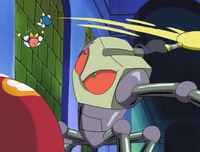 Slice n' Splice is sold to King Dedede by Night Mare Enterprises as a "special" offer. The monster also comes with a how-to video which the King neglects to pay attention to, instead taking Slice n' Splice into Cappy Town to have fun swapping the villagers bodies at their expense. Later on, King Dedede sends the monster after Kirby and splits him into two smaller versions of himself, which Fololo & Falala guard from further separation.

After a lengthy chase, Slice n' Splice catches up to Fololo & Falala and recognizes them as the former monster Fofa. It explains that several years prior, it was responsible for splitting Fofa into two as a special "two-in-one" offer from Night Mare Enterprises to King Dedede. Upon this revelation, Fololo & Falala fight Slice n' Splice and snatch its Sun staff away from it in order to reunite the Kirbys and themselves. They succeed in reuniting Kirby into one, but Slice n' Splice is destroyed and the Sun staff broken before they can do the same to themselves.