Fighter is a Copy Ability which empowers Kirby to be able to perform a wide array of strong martial arts techniques to defeat his opponents. Among these techniques are famous moves such as Vulcan Jab, Smash Punch, Spin Kick, and Rising Break, all of which can do massive damage up close. In addition, Kirby can also fire energy blasts from his hands, similar to fighters from the Street Fighter series, and grab opponents to toss them away. Kirby typically gains this ability when he swallows Knuckle Joe, and gains an iconic red headband which in more recent games has a star emblazoned on it. Fighter Kirby is well-known for having lots of moves, which can be difficult for new players to reliably pull off.

Fighter first appeared as a Copy Ability in Kirby Super Star, and has since been a mainstay in subsequent games that follow in its legacy. Many of Fighter Kirby's moves would be incorporated into Kirby's moveset in the Super Smash Bros. series, and from there, several would be recycled back into the Kirby series through the Smash Bros. ability.

Among the classic Copy Abilities, Fighter is notorious as having far more distinct moves than most. The ability is based heavily on traditional fighting games, replicating their gameplay with a unique gimmick: it provides Kirby with different moves depending on if the attack button is tapped ("light") or held ("heavy"). As such, it is one of the more difficult Copy Abilities to master. Once these moves are taken to heart, however, Fighter becomes one of the most potent and fluent abilities in Kirby's arsenal.

Among the move-set are famous techniques such as "Vulcan Jab"—a rapid series of punches that can be held indefinitely, "Smash Punch"—a more powerful single punch that creates a shockwave passing through foes, "Leg Sweep"—a sliding kick that knocks enemies away, "Spin Kick"—a series of sweeping kicks that carry Kirby through the air with their momentum, "Force Blast"—a powerful energy blast that can be charged using the hands, and "Rising Break"—a Masher-slaying uppercut that carries Kirby higher than a jump when used. The ability also gives Kirby the ability to grab enemies and toss them away, similar to Suplex, though not quite as central.

Since its introduction in Kirby Super Star, Fighter's main representative enemy/helper has been Knuckle Joe, though a handful of others also provide it when swallowed. Since then, the ability has retained all of its most iconic moves and, starting with Kirby's Return to Dream Land, has only grown more complex over time. In these latter years, Fighter had consistently been the most complex Copy Ability in terms of number of distinct moves until it was usurped by Wrestler in Kirby Fighters 2, which also happens to be a fighting-oriented ability.

Fighter has similarities to many other Copy Abilities, whether that be in its appearance, its moveset, or both. The following are abilities that bear some resemblance to Fighter, along with details on what they share in common, listed in chronological order: 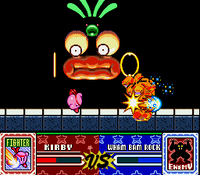 Fighter debuted in Kirby Super Star and also appears in its remake Kirby Super Star Ultra. In these games, Kirby can obtain this ability by swallowing Knuckle Joe or Iron Mam the Mid-Boss, or by touching Copy Essences or the Copy Essence Deluxe in Planet Floria. With this ability equipped, Kirby can create Knuckle Joe as a helper. Kirby's visual appearance only changes by adding a red headband.

Fighter Kirby also makes an appearance on the poster for The Arena (in Kirby Super Star Ultra, he appears in the cutscene for the game mode instead), and in Megaton Punch. 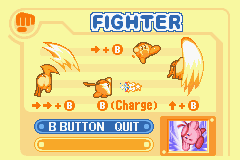 The pause subscreen for Fighter in Kirby & The Amazing Mirror

Fighter appears in Kirby & The Amazing Mirror, despite having not appeared in the prior title Kirby: Nightmare in Dream Land upon which this game's engine was based. As is typical for the ability, it has a large variety of moves, unlike most of the other abilities in the game. The bandana turns gray when the Chalk Spray Paint is equipped and white when the Red Spray Paint is equipped. Fighter is provided by a fair number of enemies in the game, including the following:

Fighter returns in Kirby: Squeak Squad, bearing largely the same look and feel as it had in Kirby & The Amazing Mirror, though with a few adjustments. Its moveset is the same as it was in its previous appearance, save for one addition: Fighter Kirby can now also perform the Air Drop technique when → + B is used near an enemy (facing right). Fighter is once again provided by Boxin and Box Boxer. Acquiring the Ability Scroll for the Fighter ability allows Kirby to launch an even bigger force blast which can break metal blocks.

Additionally, Kirby gains a unique idle pose when he has this ability. He raises his arms and sways back and forth in a fighting stance, in a similar fashion to that of Ryu from Street Fighter.

Fighter is one of the abilities which is featured in New Challenge Stages. Its move-set and look are identical to its appearance in Kirby's Return to Dream Land. It is primarily used in the Fighter Combat Chamber, but can also be used in subsequent Magolor Race stages.

Fighter returns once again in Kirby: Triple Deluxe, being provided by Knuckle Joe, and retaining its moveset from Kirby's Return to Dream Land. It also appears in Kirby Fighters.

Fighter is one of the selectable Copy Abilities in Kirby Fighters Deluxe. It is largely the same as it was in Kirby: Triple Deluxe.

Fighter Kirby's Rare Outfit is the headband of Knuckle Joe.

Fighter returns in Kirby: Planet Robobot, unchanged from its appearance in Kirby: Triple Deluxe. It is once again provided by Knuckle Joe.

Artwork of a Fighter Kirby from Battle Royale.

Fighter is one of the abilities on offer in Kirby Battle Royale. It allows Kirby to perform a wide series of lightning-fast punches and kicks and chase his target easily. It also allows Kirby to use a special ranged attack after a brief charge-up.

Fighter has three alternate pieces of Headgear in this game. They are "Knuckle Joe's Hair", the "Wrestling Mask", and the "Goriath Hat". Ironically, the Wrestling Mask makes Kirby look very similar to Wrestler, an ability which did not yet exist when this game was released, but which has many similarities to Fighter.

Fighter returns in Kirby Star Allies, provided once again by Knuckle Joe. In addition to the large arsenal of moves Kirby obtains from this ability, he can also use Friend Throw by picking up and tossing a recruited Friend. Kirby can also recruit Knuckle Joe as a friend, who then has all of Fighter Kirby's moves.

Fighter returns in Kirby Fighters 2 as a selectable ability for Kirby to use. It is unlocked after attaining a Fighters Rank of 16. Its move-set is the same as it has been in previous titles, though damage values have been adjusted. Fighter has two Rare Hats in this game, one being the Knuckle Joe headband from Kirby Fighters Deluxe, and the other being the Goriath Hat from Kirby Battle Royale.

In the Kirby: Right Back at Ya! anime, Fighter Kirby makes a significant number of appearances, often being provided by Knuckle Joe, whether intentionally or not. When Kirby gains this ability, he dons the signature red headband, and gains increased agility, as well as several flashy energy-based attacks. The most notable of these are Vulcan Jab, Smash Punch, Spin Kick, Overhead Toss, and Rising Break; the last of which is always used as the finishing blow on his opponent. In the Japanese version of the show, Kirby always calls out the names of these attacks when he uses them.

When Kirby gains the Fighter ability, it is often when he is facing some of Night Mare Enterprises' toughest monsters. The most notable of these are Masher and its upgraded form Masher 2.0. Fighter Kirby gains his most prominent appearance, however, in Snack Attack - Part II, where he uses the ability for the majority of the episode's run-time in order to battle the five Martial Arts All-Stars.