This article is about the axe-wielding member of the Meta-Knights, and should not be confused with Butch from Kirby's Dream Land 2.

Axe Knight is a recurring enemy throughout the Kirby series, debuting in Kirby's Adventure and making its most recent appearance in Kirby Battle Royale. Along with Javelin Knight, Mace Knight and Trident Knight, Axe Knight is part of a small group of combatants, led by Meta Knight, appropriately named the Meta-Knights. As such, it is one of the enemy types encountered during a Meta-Knights Mid-Boss fight, and normally must be destroyed at least once, in order to win the battle. On very rare occasions, it can also be found outside of a Mid-Boss encounter, portrayed as a regular enemy.

Axe Knight is, relatively, a Kirby-sized creature, sporting a large, purple & gold, spike-ridden helmet with curved horns, and a small, skull-like body. It has unusually hollowed eyes, with red pupils, and wears small, oval, blue-hued slippers and round, white gloves. As its name indicates, Axe Knight is armed with a battle-axe.

Axe Knight's appearance as an axe-wielding warrior with a horned helmet may be a nod to the popular depiction of the Vikings. 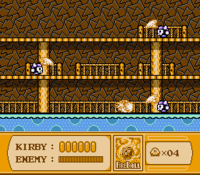 Kirby fighting a wave of Axe Knights in Kirby's Adventure.

Axe Knight debuts along with the other Meta-Knights in Kirby's Adventure and reappears in the remake, Kirby: Nightmare in Dream Land. He appears in ambush encounters along with other members of the Meta-Knights, and has two different ways of attacking. He can either continuously strike with his axe while stepping forward, or throw his axe like a boomerang. His axe can be an issue, but he is easy to defeat.

Axe Knight returns as an enemy and member of the Meta-Knights in Kirby Super Star and its remake, Kirby Super Star Ultra. In addition to appearing as part of an ambush, he may also be found in some stages as a regular enemy.

Instead of making a formal appearance, Axe Knight can be found as a collectable keychain in Kirby: Triple Deluxe.

Axe Knight with the rest of the Meta Knights

In Kirby Battle Royale, Axe Knight serves as Meta Knight's partner for the Gold League Qualifier Battle in Dedede's Cake Royale. He has the same move-set as Cutter Kirby, and is not playable. This role gives Axe Knight the distinction of being the only member of the Meta-Knights who makes a physical appearance separate from the others.