The logo for Channel DDD.

Channel DDD is the television broadcasting service provided free of charge to the citizens of Cappy Town by King Dedede in the anime series; Kirby: Right Back at Ya!. Channel DDD was first established in the episode Un-Reality TV, where Dedede attempts to use the show as propaganda and hypnosis to turn Cappy Town against Kirby. In subsequent episodes, the channel would be used more sparsely in various plot points. 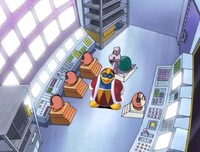 Channel DDD and all of its shows are produced and broadcast from the basement levels of Castle Dedede. A full studio with sets, props, and broadcasting equipment is present, manned by Waddle Dees and orchestrated by Escargoon. A surveillance station is also present, which allows King Dedede to monitor every household which has one of his T.V. sets through hidden live cameras.

Often, King Dedede and Escargoon use Channel DDD as an excuse to barge into the homes of their subjects uninvited and invade their privacy. This is particularly notable in episodes such as Watermelon Felon (where King Dedede encroaches on Kirby to frame him as a criminal menace), The Meal Moocher (where King Dedede barges into peoples' houses to compel them to serve him fancy food), and A Trashy Tale (where King Dedede publicly and hypocritically shames the Bookem household for the clutter that has collected in their home).

All of the shows, movies, and advertisements are produced by King Dedede, Escargoon, and the Waddle Dees. As such, nearly every show revolves around Dedede and Escargoon in various roles, and most of the television is Dedede-themed. Despite King Dedede's reputation as an incompetent oaf, most of his shows have quite good production value, though there are some exceptions, such as the premiere show "Kirby and the King", which just has Dedede talking to a hand puppet of Kirby. 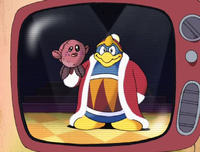 Screenshot of "Kirby and the King", the premiere show for the channel

The following is a list of notable shows that have been hosted on Channel DDD throughout the series: