Erasem is a tiny ghost-like monster which appears in the Kirby: Right Back at Ya! episode Escar-Gone, described as one of Night Mare Enterprises' most fearsome monsters. It is an ethereal creature which attacks its victims by entering their bodies and making everyone around them forget who they are. Erasem can be ejected if the victim is delivered extreme pain, whereupon it will fly out and seek a different victim to possess. It is unclear how Erasem can actually be defeated.

Erasem is a tiny white creature which resides in a bubble of light and flies around like a firefly. It resembles a human embryo to an extent, though it has a single thick horn on its forehead and is shaped somewhat like a question mark. Erasem is somewhat translucent and ethereal in nature, and is able to pass through solid objects. Erasem is capable of speech, though it does not speak directly to any of the characters.

When Erasem enters a host body, it causes everyone who ever made contact with the victim to forget entirely about them. This effect takes a few seconds to activate, as seen when Kirby inhales Erasem at the end of Escar-Gone. While all memories others have of the victim prior to the possession are wiped out, it is still possible for new memories of the victim to form while possessed. Erasem is said to only leave its victim if the host is subjected to extreme pain, though it also leaves Kirby with little suffering on his part at the end of Escar-Gone. 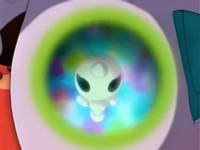 Erasem is featured in the episode Escar-Gone where - after being brought in by King Dedede using the Monster Delivery System - it possesses Escargoon in his sleep, causing everyone to forget who he is. Despite this effect, Meta Knight and Tiff are eventually able to clue together what happened and agree to help free Escargoon from the monster. They do this by taking him to the Castle Dedede dungeon and subjecting him to various tortures until Erasem is ejected from his body. The group then tries to chase Erasem as it flees into Cappy Town, where Kirby inhales it. Kirby is then forgotten by everyone in a similar manner, and Erasem eventually leaves Kirby's body at the very end of the episode, escaping into the end-wipe.