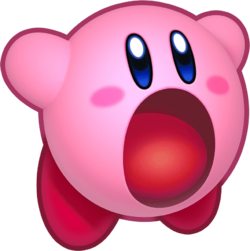 Inhale (sometimes called Vacuum or Swallow) is one of Kirby's main abilities, debuting in the first game, Kirby's Dream Land, and being usable in many subsequent Kirby games. Kirby performs this ability by opening his mouth wide and sucking in air, which creates a vortex, dragging nearby enemies or other objects toward him and into his mouth. From there, Kirby can either swallow them, effectively removing them from existence, or shoot them back out as a Star Bullet which shatters on impact. In most games, many enemies and projectiles, when swallowed, grant Kirby a Copy Ability based on the nature of the thing Kirby just ate. Effects vary based on the game, but usually the same types of enemies provide the same abilities.

Kirby making use of the Super Inhale to swallow many blocks at once in a pre-release version of Kirby's Return to Dream Land.

In most games in the series, Kirby's Inhale can work through walls, allowing him to nab enemies and even items in some cases through them. Often times, doing this is necessary to solve certain puzzles. Kirby can also inhale multiple enemies and/or objects at once. If he spits them out, it creates a more powerful star projectile, which can pass through multiple targets. In some games, it grows proportionally to the number of objects inhaled. In other games, Kirby can inhale his friends, and use them as projectiles, though this does not destroy them like it does the enemies. Inhale can also be used to grab certain things, such as food items, through walls.

Inhale works on most enemies in the Kirby series, but some enemies are immune to this technique. The most common examples of enemies that cannot be inhaled are Bosses, Gordos, Shotzos, Scarfies, and Mumbies. While there may be a large number of reasons as to why Kirby cannot inhale these entities, the English manual for Kirby's Dream Land states that such enemies are simply "too nasty" for Kirby to swallow.[1]

In Kirby & The Amazing Mirror onwards, Kirby can perform a stronger variant known as Super Inhale. This technique is often necessary to swallow and/or simply make budge larger objects. In Kirby & The Amazing Mirror and Kirby: Squeak Squad, Kirby will tire after using this variant for too long, and will have to rest. In Kirby's Return to Dream Land, the player must either shake the controller or input several different directions on the + Control Pad while inhaling to perform this technique. In Kirby: Triple Deluxe, Kirby: Planet Robobot, and Kirby Star Allies, Kirby's inhale will transfer into a Super Inhale automatically, like in Kirby & The Amazing Mirror and Kirby: Squeak Squad; however, unlike those games, Kirby does not get tired afterwards and can Super Inhale for an indefinite amount of time.

Kirby: Triple Deluxe also contains an even more souped-up version of Inhale, known as Hypernova. This ability can be acquired by eating Miracle Fruit. Using this, Kirby can inhale massive objects, and also move while inhaling. In addition, he can even swallow some bosses whole, which is impossible to do with the normal Inhale.

Kirby inhaling a Mike in the third level, Float Islands.

In Kirby's Dream Land, inhaling is Kirby's primary method of dispatching enemies, either in swallowing them, or spitting them back out. Against bosses, the usual strategy was to inhale any projectiles thrown his way and spit them back. Kirby cannot gain a Copy Ability from inhaling an enemy, as this feature only appears in later Kirby titles.

Starting with Kirby's Adventure, Kirby can obtain a Copy Ability from inhaling then swallowing an enemy. Additionally, the Throw ability utilizes an inhale for Kirby to grab hold of an enemy before tossing them. 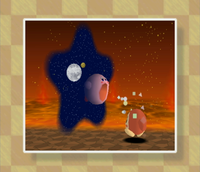 Kirby using his inhale to save his Waddle Dee friend in Kirby 64: The Crystal Shards

In Kirby 64: The Crystal Shards alone, Kirby is able to use his inhale underwater without assistance from another character like Kine. This is also the first game where he can put two Copy Abilities together, allowing for combinations like Cutter-Cutter, Bomb-Cutter, and Burn-Needle. This game is also the first instance where Kirby can move forward or backward while inhaling, an ability which would not be seen again until the introduction of Hypernova.

Strangely enough, in this game alone, it is possible for enemies to get 'stuck' on platforms when Kirby is attempting to inhale them. In this case, they will stay in place, spinning around for a moment before being 'defeated' and vanishing.

Kirby & The Amazing Mirror is the first game in the series where Kirby can Super Inhale. Often, he needs to team up with the other three Kirbys to move large objects.

In Kirby: Squeak Squad, Kirby can store up to five objects that he has swallowed in his Copy Palette for later use. Kirby is also able to combine certain abilities he has stored away, like combining Sword with Spark to create an electric sword, or two otherwise incompatible abilities to get a random new ability. The Copy Palette feature did not return in later games, though a similar feature called the Assist Star would appear in Kirby: Triple Deluxe and Kirby: Planet Robobot.

In Kirby's Return to Dream Land, Kirby is able to inhale his friends and spit them out as part of his projectiles. This does not hurt them, making it sometimes a useful strategy to use Kirby's friends as ammunition.

Kirby: Triple Deluxe is where the Hypernova ability made its debut. At one point near the end of the game, Kirby uses it to inhale an entire boss, defeating it in one fell swoop. He also uses it to defeat the final boss of Story Mode. 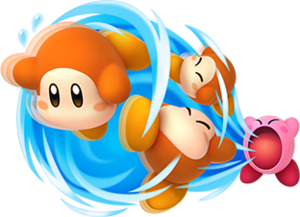 Kirby gets particularly big when he inhales a bunch of enemies in Kirby's Blowout Blast. When he releases them, the star that results is referred to as a Blaster Bullet, and can wipe out enemies in a huge area.

In Kirby and the Forgotten Land, Kirby is once again able to move around while inhaling, this time in all directions. He's also able to inhale while swimming above water. An option for Auto Swallow is available so Kirby will automatically swallow an enemy or a hat that gives a Copy Ability, which is on by default.

When near an an object that can be used in Mouthful Mode Kirby can inhale it even with an active copy ability. Elfilin will point this out to Kirby if he repeatedly discards his abilities near a "mouthful" object.

Games where Kirby does not inhale[edit]

The following are games where Kirby either cannot or does not use his inhale, with further explanations given where appropriate:

Other entities that can Inhale[edit] 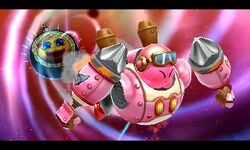 Kirby is not the only one who can Inhale. The following is a list of other entities that use an Inhale to attack, though most of them cannot Copy abilities or even swallow:

Kirby attempting to use his Gobble in Kirby Fighters 2

In Kirby Fighters 2, Kirby does not have the ability to inhale (due to utilizing Copy Abilities). However, he can use a different technique called Gobble which allows him to eat his opponents and then spit them back out to deal damage. The only functional difference between this and a regular Inhale is that Kirby does not use suction (meaning he has to be up close to catch someone), and he cannot swallow. Gooey and King Dedede also make use of Gobble in this game.