This article is about the character in Kirby: Right Back at Ya!. For the video game enemy, see Kabu.

Great Sage Kabu is a supporting character in Kirby: Right Back at Ya!. He is a massive stone idol who resides in the aptly named Kabu Canyon and is worshiped by the residents of Cappy Town, who often come to the canyon in large congregations to seek his council. Kabu is able to predict the future, and will relay this information to the people when they approach him. Kabu is often threatened by King Dedede and Escargoon, since the people respect him more than they do them.

Kabu is hollow, with his inside acting as a sanctuary. It is here that Kirby's Warp Star is eventually kept for safekeeping, and whenever Tiff calls for it, it flies out of Kabu's mouth to Kirby's aid, then returns when the crisis is over.

Kabu is a giant inanimate stone statue which somewhat resembles a Moai head, though more rounded and with a blockier face. The only part of Kabu that can move is his mouth, which also acts as an upper doorway through which Kirby and the Warp Star can pass through. Kabu sits at the heart of the precipitous Kabu Canyon surrounded by carved stone pillars and a deep pit, with brick walkway leading up to a large brazier lit in front of him. Inside Kabu is a chamber which acts as a sanctuary for Star Warriors, and comes complete with a small pedestal which the Warp Star can be set into, where it can be repaired by Kabu whenever it takes damage. When the Warp Star is called for by Tiff, it flies out of Kabu's mouth toward Kirby, and returns to Kabu once the crisis is over.

Kabu assists the people of Dream Land by providing them with knowledge about both past and future events, though he does not provide this assistance to King Dedede due to his antagonistic nature towards the great sage. Kabu also has the ability to telepathically communicate with anyone inside his sanctuary, having the power to show them visualizations and alter the content of their dreams. In Air-Ride-in-Style - Part I, the N.M.E. Sales Guy explains that there are thousands of Kabu statues across the universe, and their primary function is to act as places where Star Warriors can rest and recover.

The following is a complete list of all of Kabu's appearances in Kirby: Right Back at Ya!, along with other information regarding his role in each episode:

(appearances which only reuse the Warp Star scene are not counted)

Episodes which only use the Warp Star scene[edit] 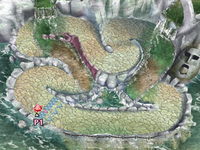 Kabu appears on the right on the Water course in Top Ride.

Kabu makes a cameo appearance as a decoration on the Water Top Ride course in Kirby Air Ride. He can be seen to the right just off the course.