Kit Cosmos is an old drill sergeant Star Warrior who appears exclusively in Kirby: Right Back at Ya!. He appears primarily in the episode Island of the Lost Warrior, where he is the main focus of the episode. Having lived alone on a deserted island far from Dream Land for years, he is initially paranoid that Kirby and his friends are monsters out to get him when they wash ashore, but eventually come to understand who they really are after Kirby defends him from the wind monster Tornadon. Later on, Kit Cosmos would appear as part of the crew of the Halberd in the final episodes of the show.

Kit Cosmos is largely ball-shaped, with skinny arms and legs jutting out of his circular body. His body is covered completely in thick hair, with only a large pair of eyes, his mouth, and a mustache and eyebrows popping out the front to make up his face. Unlike many other characters, he has well-defined hands and feet. He wears no clothing save for a hat which resembles that of a military officer.

Kit Cosmos is defined by his extreme paranoia and devotion to his former role as a drill sergeant in the Galaxy Soldier Army, perhaps brought on by his years spent in isolation from others along with his advanced age. He seeks to continue the fight against Night Mare Enterprises, but is also somewhat of a coward, preferring to set up traps and attack from the shadows, and fleeing after his initial bout with Tornadon. His personality flaws lead him to mistrust Kirby and the kids when they first show up on his island, but he eventually comes to respect them.

Role in Island of the Lost Warrior[edit] 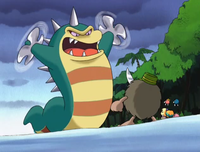 Kit Cosmos makes his defining appearance in the episode Island of the Lost Warrior. After Kirby, Tiff, Tuff, and Fololo & Falala get stranded on his island, he attempts to attack them using arrows from out of sight and using traps he set up, believing them to be monsters sent to get him. After a brief tussle, the kids form an uneasy truce with Kit Cosmos due to their incompetence at fighting back against him, and he sends them through a from of boot camp to shape them up as fighters.

When King Dedede and Escargoon show up on the island in their Armored Vehicle, Kit Cosmos sees this as a deception from the kids to bring reinforcements, and two intruders play into this false belief before releasing Tornadon to attack the group. However, seeing Tuff and then Kirby fight back against Tornadon snaps Kit Cosmos out of his old ideas for good. Seeing how effectively Kirby had repulsed the monster brings new hope for Kit Cosmos that perhaps the battle against Night Mare Enterprises can be won after all. He entrusts Kirby and Meta Knight with the job as he returns to solitary living on his island, promising to return to the fight if he is needed.