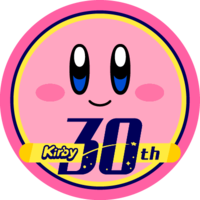 The Kirby JP Twitter (known in shorthand as @Kirby_JP, formerly known as the Kirby 25th Anniversary Twitter) is the official Twitter account for the Kirby franchise and is administered by HAL Laboratory. As implied by the name, the Twitter account is presented in the Japanese language, and no formal English equivalent exists. On the Kirby JP Twitter, announcements and posts of all sorts are made relating to the Kirby franchise, including "presentations" from in-universe characters, artwork produced to commemorate specific events, news relating to new releases, and links to merchandise and related Nintendo and HAL Laboratory ventures. The Kirby JP Twitter was initially established in November 2016, and made its first post on December 11th, 2016. As of 2022, it has since made more than 2,500 posts and has garnered more than 385,000 followers.

The feed was originally created to celebrate Kirby's 25th anniversary along with a partner website. After the turn of the 26th anniversary, the feed and website were re-branded to remove the '25' motif, and have continued under general coverage of the Kirby franchise. The account was given 30th anniversary branding in 2022, but remained under the same display name and handle. 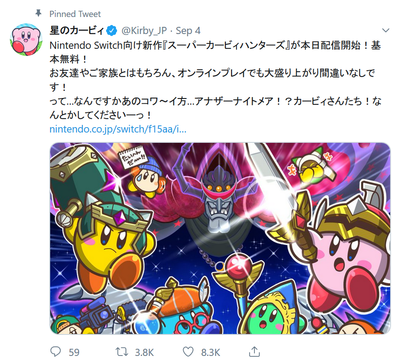 An example of one of the tweets from the Kirby JP Twitter.

The Kirby JP Twitter is fairly broad in terms of what comprises its tweets. Tweets range from simple announcements and merchandise plugs made in the real world to special "presentations" made by in-universe characters to describe various aspects of the series. While tweet topics invariably involve the Kirby series, priority is often given to coverage of recently released titles. As such, since the initial creation of the feed, much of the contents relate to games recently out at the time, and characters representing the appropriate games are often called in to "present" the news for those titles: for example, Susie for Kirby: Planet Robobot, The Three Mage-Sisters for Kirby Star Allies, and Magolor for Team Kirby Clash Deluxe and Super Kirby Clash. When covering more general Kirby topics, the news is often "presented" by a quartet of Waddle Dees referred to as the Channel PPP Crew. Naturally, due to Kirby's own disposition, he is almost never picked as a presenter, and is often the subject being covered instead.

One particular recurring feature is the Dedede Directory (referred to in full as "King Dedede's Wisdom! Dededen Great Directory", translated from Japanese 「デデデ大王のひらけ！デデデン大名鑑」), a series of posts where King Dedede describes various characters from the Kirby series in his own words. These descriptions are formatted with an image portraying King Dedede standing next to a collage of artwork of the character he is describing, and often provide insights into each character's traits and background, particularly if they are an obscure minor character.

Furthermore, whenever a special event takes place, or to celebrate a holiday, a commemorative piece of artwork is often created and posted to the Twitter feed. These illustrations are depicted in simple 2D vector style, and feature Kirby and other characters from the Kirby video game series in various situations. Often, these illustrations feature more obscure characters, enemies, and other objects.

In addition to news announcements and recurring features, more traditional promotional material (such as artwork, videos, and interesting lore) is often revealed in these Twitter posts which cannot be found in any of the games proper. Other details such as musical tracks, concept art, and developer commentary are sometimes released as well. As is normal for Twitter posts, users are allowed to post reactions to each of these announcements, with comments often stretching into the hundreds or thousands.

To celebrate holidays or special events such as game releases, special artwork is posted to the account:

During times when a new game is in the spotlight, there will be a special running report on the game's contents and related subjects. Often, one or more representative characters from that game will act as the "reporter" for each post:

A number of other report series have also appeared on the Twitter feed. These are as follows: