Kirby: Planet Robobot is the eleventh game in the main Kirby series, released for the Nintendo 3DS in 2016. The central theme of this game revolves around robotic and futuristic industrial settings, as Kirby's home planet Popstar has been taken over by an enterprising intergalactic alien business called the Haltmann Works Company. Kirby needs to venture through his mechanized planet and fight off the invaders by turning their technology against them, making use of a new power-expanding robotic suit called the Robobot Armor. In the process, Kirby fights and then frees Meta Knight - who had been captured and mechanized by the company - and then eventually defeats the company and their mother computer with his help.

Kirby: Planet Robobot uses the same engine and general play-style as preceding games Kirby: Triple Deluxe and Kirby's Return to Dream Land, and once again incorporates the use of jumping between foreground and background, as Kirby: Triple Deluxe did. Like Kirby: Triple Deluxe, the game features two extensive Sub-Games - this time in the form of Team Kirby Clash and Kirby 3D Rumble - and also features an Extra Mode called Meta Knightmare Returns. A free demo version of the game is available where the first two stages of the game's story mode can be played.

Kirby runs off toward a leg of the ship that took over Popstar.

A robotic organization known as the Haltmann Works Company has targeted Popstar for its industrialization purposes. They fly down a giant spaceship roughly the same size as Popstar to take over, as both King Dedede and Meta Knight try in vain to stop them. Kirby wakes up from under an oak tree to see the damage done, and is tasked with stopping the invaders from completely mechanizing his homeworld.

Kirby busts his way through each area, damaging the five legs that prop up the Haltmann Works Mothership: the Access Ark. Along the way, he encounters Susie - Executive Assistant - who antagonizes him both by fighting him directly, and by throwing subdued and/or cloned versions of his friends after him. Once all five legs of the Access Ark are down, Kirby enters the ship itself, and battles with the primary villain behind this plot, President Haltmann. In the process, he discovers that all of this was made possible for Haltmann Works by a self-aware supercomputer known as Star Dream.

Even after all the devastation, Kirby and his planet are right back to normal after all is said and done.

When Haltmann is defeated by Kirby, he attempts to use Star Dream to exact revenge, but then Susie betrays him, stealing his means of controlling the computer and causing him to black out. Susie then reveals that she wanted to take control of the computer for herself, but Star Dream then activates by itself and zaps Susie away. At this point, the computer is fully in control, fusing Haltmann's mind and soul with its operating system, and declares that it will erase all of history in order to bring about an age of 'infinite prosperity'.

Begrudgingly, Susie helps Kirby to defeat it by offering him a suit of Robobot Armor. Meta Knight, having been freed by Kirby from the company's clutches, brings the Halberd in as well, and merges it with Kirby's armor in order to take down Star Dream, who turns out to be another variety of Nova. Once it is finally defeated, Popstar is returned to normal, and Susie leaves Popstar behind on her own, departing to parts unknown. 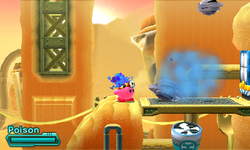 Gameplay in Kirby: Planet Robobot is similar to its immediate predecessors, though featuring new abilities and situations.

Kirby: Planet Robobot plays more-or-less the same as Kirby: Triple Deluxe, as a 2.5-D platformer, with paths in the foreground and background, and levels with stages to complete sequentially. Also as before, Kirby will need to collect a number of special objects in order to unlock the path to the Boss in each level, and/or unlock extra stages. Kirby makes use of his Copy Abilities as usual to solve puzzles and break his way through the enemy forces, many of which are mechanized versions of the usual enemies.

New to this installation, however, is the inclusion of a suit of power armor that Kirby can pilot, called the Robobot Armor. It appears in various points of the stages and allows Kirby to smash his way through larger obstacles, though it comes with some drawbacks in most instances, the most obvious one being the inability to float indefinitely in most cases. The suit is also modular with some of the Copy Abilities, taking on new form and function with each one.

On top of this new mechanic, Kirby: Planet Robobot features more enemies, new and different items and tools, and new and different Copy Abilities to utilize: most notably the all-new abilities Doctor, ESP, and Poison. It also employs circular pathways in some areas, not seen since Kirby 64: The Crystal Shards, and flying shooter sections reminiscent of the endgame for Kirby's Return to Dream Land.

Like in Kirby: Triple Deluxe, Kirby is able to store certain Food items for later use as Assist Stars from Bandana Waddle Dee. These can be improved through the use of StreetPass. Additionally, the game is compatible with amiibo, which allows Kirby to obtain a Copy Ability from one when scanned. Among the abilities he can get from these are special costume variants of Hammer, Sword, and Parasol, as well as the long-lost abilities Smash Bros. and UFO, which are otherwise carefully hidden inside the game itself.

This game is also compatible with amiibo, coming with its own set as well. Scanning in an amiibo will give Kirby a Copy Ability specific to the amiibo scanned, as well as the home set unlocking special costumes. Scanning the Super Smash Bros. Kirby amiibo will unlock the Smash Bros. ability (formerly known as "Smash"), and scanning the home series Kirby amiibo will unlock the UFO ability, which is the easiest way to obtain it. 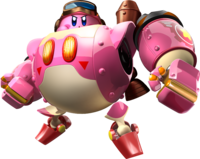 The central gimmick of Kirby: Planet Robobot is the Robobot Armor, which is available in several stages and can merge with certain Copy Abilities.

Kirby: Planet Robobot features a total of 27 standard Copy Abilities, with three of them being brand new abilities, and four more returning from long absences. Like Kirby's Return to Dream Land and Kirby: Triple Deluxe, these abilities feature extensive move-sets and most offer high versatility. Many of these abilities are compatible with the Robobot Armor.

Introduced in this title is the potent Robobot Armor, which in turn is compatible with various Copy Abilities. The Robobot Armor is obtained by defeating Invader Armor or by finding it in stages. When inside the armor, Kirby becomes much more powerful, but in most cases, loses his ability to hover indefinitely and can no longer fit through tight gaps. Kirby will retain any ability he had before entering the armor and it will not affect the abilities that the armor can acquire. Kirby cannot exit the armor once he enters unless he finds a docking station or exits the stage.

Kirby: Planet Robobot features a total of 42 stages in the Story Mode, spread out across seven areas. All main areas include one boss stage and one Extra stage (except for Level 6, which has two Extra stages), which are included in the stage count.

The first letter of each area, when put in order, spells out a word related to the game, much like in some of the previous Kirby games.

Most Mid-Bosses also come in 2.0 variants, which are fought in Meta Knightmare Returns and The True Arena.

Kirby: Planet Robobot was originally planned as a follow up to Kirby: Triple Deluxe, being referred to as Kirby: Triple Deluxe 2.[1] Once it was decided that the game's theme would revolve around mechanization and industrialization, the name was changed to Kirby: HAGANE (hagane means "steel" in Japanese). The title went through a few more changes, Kirby: Robot Planet, Roborobo Planet, and finally, Planet Robobot, to keep with the playfulness of the Kirby universe. From the finalized title, the Robobot Armor got its name.[2]

Cappy was meant to have an attack that allowed him to toss his cap between foreground and background. A full working version can be found in the game, but it was never implemented.

In certain trailers prior to the game's release, a cinematic fight between Kirby and an Invader Armor can be seen, which incorporates elements from the "Metal Invasion" cutscene. In the final product, the Invader Armor is fought in a normal Mid-Boss fight in Patched Plains - Stage 2 instead. The scene also seems to be part of the "First Contact" cutscene.

The following is a list of staff who have worked on Kirby: Planet Robobot: