Ninja is a Copy Ability characterized by its large array of weapons and techniques inspired by the stereotypical Japanese ninja warrior. Kirby can gain this ability primarily by inhaling either Bio Spark or Moonja, and gains access to a wide array of attacks, such as slashing foes with a katana, throwing knives, using a vanishing act to retaliate against attackers, or using various martial-arts strikes, like the lightning-fast Ninja Kick or the devastating Air Drop attack. Ninja Kirby also typically has the ability to cling to walls or, in Kirby: Squeak Squad, walk on the surface of water.

The Ninja ability first appeared in Kirby Super Star, and gave Kirby a distinctive red cap with a large ponytail attached. From Kirby's Return to Dream Land and onward, the Ninja hat would resemble a purple cowl with a studded headband. Many earlier games would cause Kirby to take on a purple hue when using this ability. 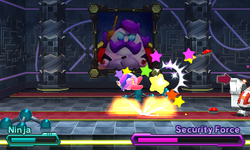 Ninja Kirby making use of the Air Drop technique on a Drop Star to toss it at a Security Force in Kirby: Planet Robobot

The Ninja ability is among the most elaborate and complex in Kirby's arsenal, rivaling abilities like Fighter and Sword in that regard. Unlike many other abilities, Ninja Kirby is very versatile, having many different options for both close-quarters and distant combat, as well as being able to solve any puzzles that have to do with slicing things. In later games, Ninja Kirby is ideal for solving highly specific puzzles, such as throwing a knife though a small gap high above the floor (assisted by a Wall Cling) or putting out fire blocks above the surface of the water (using Ninja's special "Stealth Water Gun" technique).

Ninja Kirby's most basic techniques revolve around the use of his throwing knives and his sword, both of which he can employ very rapidly. Most of his other techniques are arguably more situational, and it can often be difficult for Ninja Kirby to rack up large amounts of damage on stronger opponents as quickly as Fighter or Hammer Kirby can. Despite this, Ninja Kirby's versatility and varied moves allow for a very diverse playstyle if the player is willing to experiment with his other attacks. 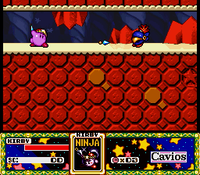 Ninja debuted as a Copy Ability in Kirby Super Star and Kirby Super Star Ultra. Here, Kirby can obtain the ability from Bio Spark, who also serves as the ability's helper. With Ninja equipped, Kirby's visual appearance changes by him turning a darker shade, and wearing a hat similar to that of the Stone ability.

In Kirby: Squeak Squad, Ninja is obtainable from Bio Spark and Spinni's throwing stars. The moveset is very different from its previous appearance and even future appearances, in that Kirby notably throws shurikens instead of kunai and the gimmick of holding the attack button rather than tapping to use certain moves is completely missing. In addition to this, Kirby does not have a counter move, but he can charge energy and release it in a big wave if he has the Ability Scroll for Ninja. He is also able to walk on the surface of water.

When Kirby has the Ninja ability in this game, he takes on a unique idle stance where he has a dour look and a battle-ready stance. This stance is not seen in any other Kirby game.

Ninja returns as an ability in Kirby's Return to Dream Land and its remake, Kirby's Return to Dream Land Deluxe, acquirable by swallowing a Moonja. Many new techniques are available in this iteration, as well as a new hat. This appearance of Ninja would set the standard for the remainder of Ninja's appearances in the main series, adding moves such as "Stealth Slash", "Smoke Screen", "Blossom Storm", and the "Stealth Water Gun".

Ninja returns as an ability in Kirby: Triple Deluxe, mostly unchanged from its appearance in Kirby's Return to Dream Land, with the exception of Smoke Counter being removed, Hide Guard being reworked into a new move called Clone Technique, and Quad Shock no longer being able to be used in the air, and still obtained from Moonja. It is also one of the abilities available in Kirby Fighters.

Ninja returns as one of the selectable abilities in Kirby Fighters Deluxe, retaining its look and properties from Fighters. Ninja also has a Rare Outfit in this game, which gives Kirby a white hood with a different-style headband.

Ninja returns, along with Moonja, in Kirby: Planet Robobot. It is still unchanged from its previous appearance in Kirby: Triple Deluxe.

Ninja is one of the abilities on offer in Kirby Battle Royale. In this title, Ninja Kirby is able to create a decoy of himself, which will explode on contact with a foe, and he can also create a huge fiery explosion using a stealth bomb. Unlike other abilities, Ninja has a total of three charge-up moves.

Ninja Kirby has three different costumes in this game, those being the Bio Spark Helmet, the Topknot (a reference to Samurai Kirby), and the Samurai Helmet.

Ninja returns in Kirby Star Allies, though this time it is once more provided by Bio Spark, who also represents the ability as a Friend. Ninja can be augmented by Power Effects such as Blizzard, Bluster, and Zap. Aside from this, its moveset is identical to that of its previous appearances.

Ninja appears in Kirby Fighters 2 as a selectable ability for Kirby. It features the same moveset as the main series version, though it lacks the Stealth Water Gun technique (due to there being no bodies of water in the game). It is unlocked after attaining a Fighters Rank of 33. Ninja comes with two unlockable Rare Hats: the first is the Shinobi Hood from Kirby Fighters Deluxe, and the second is the Samurai Helmet from Kirby Battle Royale.

In Kirby's Dream Buffet, Ninja Kirby appears on one of the Character Treats, using his artwork from Kirby Super Star Ultra. Ninja is not an ability in the game proper.

The Ninja Copy Ability makes only one appearance in the anime series Kirby: Right Back at Ya!; that being the episode Ninja Binge. Kirby gains this ability when he inhales one of Yamikage's knives after he throws it at Benikage. Using the Ninja ability, Kirby gains the power to instantly teleport to different locations, and then finishes Yamikage off with the Air Drop technique.

Based on the events of Ninja Binge, it is probable that Ninja Kirby was planned to make at least one more appearance in a future episode where Yamikage would return for his revenge, but this never came to pass.