Flame Galboros is a large Galbo-like enemy which has appeared sparsely throughout the Kirby series. Flame Galboros is essentially a fire version of the Mid-Boss Water Galboros that appeared in Kirby's Return to Dream Land. Apart from shooting fire, its attacks are fundamentally similar, which include body slams and dashes. Defeating and swallowing it yields Kirby the Fire ability.

Flame Galboros is a mid-boss in Kirby: Triple Deluxe. It bears all of the same moves as its predecessor Water Galboros, but naturally, these moves are fiery rather than water-based.

Flame Galboros DX is a tougher variant of this enemy, which has a much darker color scheme, but with bright glowing areas, and its magma attacks linger for longer and can travel across the ground.

In Kirby: Triple Deluxe, Flame Galboros can be found in the following levels and stages: 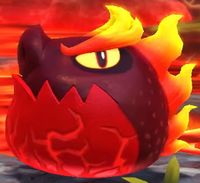 Flame Galboros as it appears in Super Kirby Clash.

Flame Galboros returns in Super Kirby Clash, bearing largely the same look and attack strategy as it had before. It has been made larger and given much more health to give it a proper boss feeling. Flame Galboros appears in a total of five different Quests, and in one of these, it appears alongside Ice Dragon and Electric Dragon to form the Super Team Kaiju Trio.

The following are all of Flame Galboros' attacks in Super Kirby Clash. Note that attack names are conjectural: