Swinging Waddle Doo behaves exactly like Swinging Waddle Dee while it is swinging, as it cannot fire its beam while on the rope. Cutting it down using a suitable ability will cause it to fall and return to being a standard Waddle Doo, whereupon it will start using its beam again. Otherwise, Swinging Waddle Doo can be defeated by attacking it directly, or swallowing it to obtain the Beam ability. 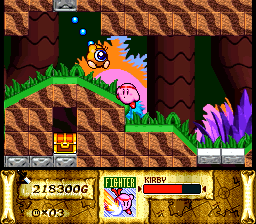 Swinging Waddle Doo in the Sub-Tree area of The Great Cave Offensive, in Kirby Super Star.

There appears to be only one Swinging Waddle Doo in the game, located in the Sub-Tree area of The Great Cave Offensive. Notably, Swinging Waddle Dee is not in this game, making his first debut in Revenge of the King in Kirby Super Star Ultra.

Swinging Waddle Doo appears again in this game. In addition to being in his old location in Sub-Tree, he can also be found in Revenge of the King. Here, it appears in Illusion Islands and The Revenge.

Swinging Waddle Doo makes its first 3D appearance in Kirby's Return to Dream Land, where now it swings from a rope made of twine rather than the old ball-composed chain. The rope can be cut using the appropriate Copy Ability, causing Swinging Waddle Doo to fall to the ground and become a normal Waddle Doo.

Much like in Kirby Super Star, there is only one Swinging Waddle Dee in the whole game. It appears in Onion Ocean - Stage 1.

In Kirby: Planet Robobot, Swinging Waddle Doo is not mechanized and only appears in Resolution Road - Stage 4.