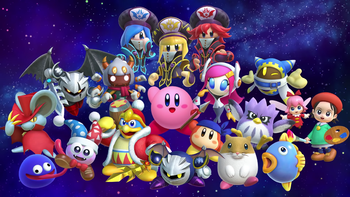 Official composite image of Kirby and the Dream Friends

Dream Friends[1] are special playable characters which Kirby can recruit in Kirby Star Allies. They are distinct from the normal Friends in that they do not represent any particular Copy Ability, instead having unique movesets.

To obtain Dream Friends, Kirby must unlock them via Story Mode and/or game update, enter a Dream Palace, and then use the Dream Rod within to call them forth. They can then remain with Kirby indefinitely, only disappearing if they are un-friended or defeated.

Dream Friends are also playable in Guest Star ???? Star Allies Go! where they can be chosen as the primary character, and The Ultimate Choice where they can be chosen as any player. In both of these modes, they must be unlocked by completing the mode once. They appear for 1P to use to solve puzzles and collect Friend Hearts after going through Hero Doors in Heroes in Another Dimension.

Kirby can recruit one Dream Friend each time he visits the Dream Palace. He can also recruit multiples of the same friend.

These Dream Friends are available in the Story Mode, but two of them need to be unlocked by defeating them as Bosses first:

(This trio are notably also the playable characters in Kirby's Return to Dream Land.)

Bandana Waddle Dee is unlocked once the first Dream Palace is unlocked, while King Dedede and Meta Knight are available once they are beaten in Clash at Castle Dedede and Sacred Square, respectively.

These Dream Friends have been available since March 27th, 2018, when the game was updated to Version 2.0.0:

(Note: Rick & Kine & Coo are treated as a single character. They switch out for certain moves and share the same health bar.)

In Story Mode, the Wave 1 Dream Friends can be summoned once the first Dream Palace is available. 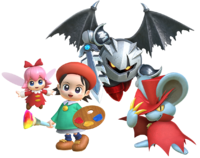 These Dream Friends have been available since July 27th, 2018, when the game was updated to Version 3.0.0:

(Note: Adeleine & Ribbon are treated as a single character. They move as one entity and share the same health bar.)

In Story Mode, the Wave 2 Dream Friends cannot be summoned until King Dedede is defeated in Clash at Castle Dedede at the end of Dream Land.

Group art of Wave 3 characters, minus The Three Mage-Sisters

These Dream Friends have been available since November 30th, 2018, when the game was updated to Version 4.0.0:

(Note: The Three Mage-Sisters are treated as a single character. They share the same health bar but can switch freely at any time, each with her own moveset.)

In Story Mode, Magolor, Taranza, and Susie can be summoned once Meta Knight is defeated in Sacred Square at the end of Planet Popstar. The Three Mage-Sisters are unlocked once at least 100 Friend Hearts are collected and the happy ending is achieved in Heroes in Another Dimension.

Each Dream Friend plays their own fanfare when they are summoned by the Dream Rod, or when they are selected on the title screen of Guest Star ???? Star Allies Go!, as well as when reaching checkpoints in that mode. The fanfares are based on their main theme song if applicable, or otherwise an appropriate theme from their origin game.

When playing as any of the downloadable Dream Friends, several levels feature entirely new rooms not seen in the Story Mode or in the runs with other characters. Additionally, several areas resemble stages from the games in which these Dream Friends originate.