This article is about the reoccurring Kirby enemy. For an item in Kirby Air Ride, which was renamed to Walky, see Mike (item).

Walky is an anthropomorphic microphone enemy which makes regular appearances in the Kirby series, first appearing in Kirby Super Star. It resembles a sentient old stage microphone with red feet and a mouth, and its sides each have a yellow hinge that connect the dark blue head with the yellow or tan mouth. Walky is typically found walking around or sitting in place; when Kirby draws near, it attacks by singing, shooting out harmful musical note projectiles. In all of its appearances, if Kirby inhales and swallows a Walky, it will grant him the Mike Copy Ability. Perhaps due in part to it providing a limited-use ability, Walky has never appeared as a Helper character. 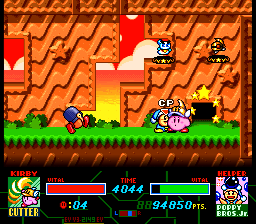 Walky walking over to Kirby and Poppy Bros. Jr. in Kirby Super Star

Walky makes its first appearance as a regular enemy in Kirby Super Star and returns in its remake. Encountered only in a very small number of locations throughout either game, this enemy usually walks back and forth and stops regularly to yell three musical notes at Kirby, which hurt him on contact. Only one Walky in the game, encountered in the fourth stage of Dyna Blade, possesses a different behavior; it moves faster than a regular Walky and runs away from Kirby with a gasp when it spots him instead of attacking, making it harmless as long as Kirby does not collide with it directly.

Walky possesses 16 points of health and increases Kirby's score by 890 points when defeated. Kirby can also swallow it for the Mike ability.

In Kirby Air Ride, Walky can be found on various Air Ride courses, where it sits still and sings to itself until it is inhaled by a passing Kirby or otherwise defeated. It grants the Mike ability as usual.

In Kirby Air Ride, Walky can be found in the following places:

Walky appears rarely in Kirby's Return to Dream Land, letting out musical notes that harm anyone they touch. Like before, swallowing it grants the Mike ability.

In Kirby's Return to Dream Land Walky can be found in the following levels and stages:

In Kirby: Triple Deluxe Walky can be found in the following levels and stages:

Walky appears once again in Kirby: Planet Robobot, unchanged from before.

In Kirby: Planet Robobot Walky can be found in the following levels and stages:

Walky appears in this title. It provides the Mike ability to Kirby, but cannot be recruited as a Friend, instead turning into the Mike Ability Item when Kirby tosses a Friend Heart at it.

In Kirby Star Allies Walky can be found in the following levels and stages:

Though Walky doesn't physically appear in Kirby and the Forgotten Land, Commentator Waddle Dee holds a microphone that strongly resembles one.

"A microphone who trudges along and enjoys himself as he sings. By inhaling Walky, Kirby gains the ability to shout, allowing him to clear all enemies off the screen with a high-volume blast. This is a powerful ability that can only be used up to three times. In Kirby Air Ride, this ability sends every racer within range into a spin."

"Walky is really just a microphone...that can walk. He's a retro sort of microphone that would look at home in a radio studio. His musical notes are more harmful than tuneful, so be sure to stay out of their way! If you manage to inhale Walky, you'll get the Mike ability, letting you destroy nearby enemies with just the power of your voice!"

In Kirby: Right Back at Ya!, Walky appears as the monster of the day in the episode Abusement Park, where it is described as "the microphone Monster". It is ordered from Night Mare Enterprises by King Dedede and, at the suggestion of the N.M.E. Sales Guy, used as a microphone for a karaoke contest. It is inhaled by Kirby for the Mike ability when it is his turn to sing, which causes the plan to send him to N.M.E. Headquarters to backfire, and Kirby later destroys Castle Dedede inadvertently. Walky later emerges from the rubble - having apparently been spat out by Kirby at some point - but when it sees Kirby again, Walky runs away in horror and is not seen again.

Walky, as seen in Kirby and the Dangerous Gourmet Mansion?!

In the Kirby novel series, Walky appears as a secondary character in Kirby and the Dangerous Gourmet Mansion?!. He has a painfully loud voice that can hurt anyone's eardrums when he yells. Walky is one of King Dedede's many subordinates that get pushed around a lot.

In Kirby and the Dangerous Gourmet Mansion?!, Walky is one of the three thieves who kidnaps Mrs. Parfaitski, with the other two being Wheelie and Sir Kibble. Walky is the last of the three to appear. He shows up when Wheelie leads Kirby, King Dedede, and Meta Knight to the cave that Mrs. Parfaitski is held hostage in. Walky uses his loud voice to stop the group, so he can explain their reason for kidnapping her. Wheelie quickly silences him; he and Sir Kibble then explain that they kidnapped Mrs. Parfaitski because she was cruel to her chefs and locked them up due to her picky and unnecessary dissatisfaction with their food. The group then heads to where an angry Mrs. Parfaitski is tied up. Kirby inhales Walky to gain the Mike ability, and sings an ear-splitting song with food-themed lyrics. This eventually causes the cave to collapse, and everyone rushes out quickly. Kirby then drops the ability, releasing a dazed Walky, who was fortunate enough to miss out on the song. With Mrs. Parfaitski finally giving in, the group returns to her mansion to free the locked away chefs.