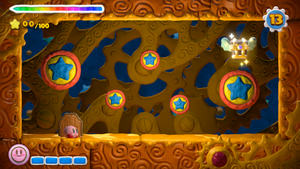 Kirby encounters a field of circular bumpers in his way in Kirby and the Rainbow Curse.

A Bumper[1] is a typically static course element and hazard which acts as a solid barrier and bumps Kirby away if he touches it. Bumpers have varying looks and specific details to them depending on which game they appear in, and may be helpful or harmful depending on how they interact with Kirby.

In Kirby's Pinball Land, bumpers are triangular wedges seen on each level of the main Pinball Lands. They award points whenever Kirby bounces into them and launch him away perpendicular to the outward-facing surface. The amount of points they reward when collided with depends on the current board level, as follows:

In Kirby's Dream Course, bumpers often appear on holes, here resembling thin green lines which often form fencing around the edges of boards or as obstacles within them. If Kirby collides with a bumper wall, he will be deflected based on Kirby's trajectory and the facing angle of the wall. If the A button is pressed at the moment of collision, Kirby will be deflected with greater force. Bumpers can be easily hopped over by using flying shots. Ramming into one using the Wheel ability will cause Kirby to bounce directly upward rather than being deflected.

In Kirby's Block Ball, bumpers take the form of Pinball Blocks, which can be infrequently found in stages. These deflect Kirby when he hits them, and cannot be destroyed by any means. Each time Kirby collides with one, 20 points are awarded, and it is possible in some instances to get Kirby caught in an endless loop with these to rack up an indefinite amount of points in a given stage.

In Kirby Tilt 'n' Tumble, bumpers appears as regular course hazards, and can come in varying shapes and sizes, from small circular ones to wider bar-shaped ones. Of the circular ones, there are two types, based on color. Red ones knock Kirby upward when he collides with them in a similar manner to being flipped, and blue ones knock Kirby away laterally. These types of bumpers can be changed from one to the other by flipping Kirby using the Game Boy Color.

It is also possible to destroy bumpers in this game by striking them repeatedly. Doing this can net Kirby some 1-Ups and can also uncover things like Red Stars. Hitting a bumper in this fashion will award increasing amounts of points, from 10 to 6400, then awarding a 1-Up when invincibility is granted.

In Kirby Air Ride, bumpers make an appearance in the Machine Passage race course, featuring as twirling floor-bound obstacles in one particular room in the latter half of the lap. They can typically be circumvented by taking one of the rails on the sides of the room or by flying over them.

In Kirby: Canvas Curse, circular bumpers can be found as obstacles in certain stages. They will violently (but harmlessly) knock Kirby away if he touches them.

In Kirby's Epic Yarn and Kirby's Extra Epic Yarn, there are circular bumpers to contend with in the Weird Woods stage. These behave as might be expected, but have a green and floral pattern to them. Some of them move back and forth through the air.

In Kirby Mass Attack, certain stage elements can bounce the Kirbys around like bumpers, most notably the big mushrooms found in Green Grounds and the big dough balls in Dedede Resort - Stage 10. A lot of enemies also attack by bumping the Kirbys around.

There is a Sub-Game called Kirby Brawlball which features the same sort of triangular bumpers seen in Kirby's Pinball Land. These are worth 50 points each time they are hit. There are also round bumpers resembling Waddle Dees which are worth 30 points per hit and may cause Waddle Dees to appear when hit.

In early stages of Dedede's Drum Dash Deluxe, circular bumpers appear which resemble Gordos but do not have spikes.

In Kirby and the Rainbow Curse, circular bumpers appear in various places, most notably in Challenge Mode stages. They bounce Kirby away with high force if he touches them.