This article is about the main game in Kirby Super Star and its remake. For the musical theme of the same name, see Gourmet Race (theme). For the game mode in Kirby's Dream Buffet, see Gourmet Grand Prix. 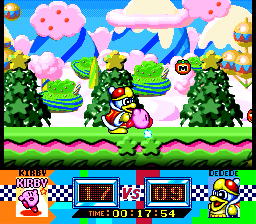 The Grand Prix game plays out exactly as it sounds: Kirby races King Dedede and eats food as he goes along his 2-D side-scrolling way. In the Kirby Super Star Ultra-exclusive multiplayer mode, the second player takes control of a yellow Kirby. The races take place over three courses: Pumpkin Grand, Corn Hall, and Onion Garden.

Kirby or King Dedede gain one point for each piece of food picked up on the course, with Maxim Tomatoes being worth three points. Whoever reaches the finish line first gains a bonus 30 points, for a possible total of 90. The winner of the Grand Prix is the one who gets the most points after finishing all three courses, with the total score combined from the food and goal points of the courses. As such, if Kirby finds himself trailing behind the King, he can potentially make up the shortfall by grabbing as many of the food items on the sidelines as possible.

Alternatively, the Time Attack mode can be played as a time trial type game for a single course, with no competition other than previous best scores. In Kirby Super Star Ultra, Ghost Kirby replaces the star as the best record runner. No food appears in the time attack courses.

In Gourmet Race, Kirby is able to run much faster than he can in other game modes. As such, it is important for the sake of speed to stay on the ground and avoid spending time in the air whenever possible. There are no enemies or other hazards on the courses which can actually defeat Kirby, so Health is not a concern (Spikes exist in Onion Garden, but do not actually deal damage). One interesting detail exclusive to this game-mode is that if Kirby hits a piece of food using an Air Bullet or Star Bullet, he will collect it.

Generally speaking, King Dedede is faster in the air than Kirby, so Kirby will need to keep ahead if he wants to grab airborne food items. Despite his greedy nature, King Dedede is not interested in all of the food items on the course, but he will prioritize Maxim Tomatoes whenever they are in reach. Kirby and King Dedede cannot interact with each-other directly, and pass through each-other.

Occasionally, obstacles in the form of Star Blocks will appear on the road. When King Dedede encounters blocks in his path, he will stop and use his hammer to clear them out. He does this rather slowly, which can be useful to Kirby if he wants to grab some extra food items or slip under the blocks using a Slide and get a larger lead.

Pumpkin Grand is the shortest and most straightforward course. This course is mostly an irregular surface beginning with sloped hills, but midway through Kirby will find holes, Star Blocks, and pillars that serve to block and slow him down. Sporadically throughout the course's path are several food items, most being worth one point each. A Maxim Tomato (worth three points) can be found within jumping reach on the goal post.

Corn Hall begins much like Pumpkin Grand, but soon changes with a steep slope downhill to an underground section. This course consists of a moderate amount of turns, flights upwards, and vertical zig-zagging obstacles.

The Onion Garden is the most elaborate course. The race will often change directions and terrain. The course will have stretches of ground running, dropping down, floating upwards, and swimming. Additionally, this course offers Copy Abilities at the earliest section. Any (or none) can be chosen; Jet, Parasol, Ninja, Wing, and Wheel are offered. At some points, there are alternative paths to choose from.